Paul Molitor and the “Brew Crew”

(This story was written during the height of the Covid epidemic) 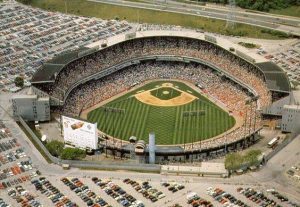 With sporting events and activities on hold, as a result of the Corona virus, I’ve been catching a few old games on tv. Our local cable network has been featuring old Green Bay Packer games, and Milwaukee Brewer games as well. For the past several days, playoff games from the Brewers great 1982 season have been airing.

I’ve been a Brewers fan ever since they moved to Wisconsin from Seattle. Before that I was a Milwaukee Braves fan, but don’t get me started on that! 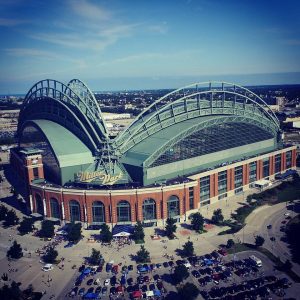 I’ve been able to attend many Brewer games over the years, at County Stadium, and the newer Miller Park. I even caught a few Brewer games out on the road while I was in the U.S. military. My wife and I attended a few Brewer games at County stadium during that great 1982 season. That year, with an outstanding manager in Harvey Kuenn, and a roster loaded with talent, including the likes of Robin Yount, Cecil Cooper, Gorman Thomas, Jerry Augustine, and of course, Paul Molitor who had a huge year, they almost went all the way. The St. Louis Cardinals won the World Series, beating the Brewers in th 7th heart breaking game of the series.

Fast forward to 1996. I was working as the Senior Buyer for Tri-Clover, a Kenosha manufacturer of pumps valves and fittings for the food, dairy and pharmaceutical industry. One great perk of being a buyer, was complimentary tickets to many sporting events. Over the years I, along with members of my family and friends were able to attend Brewer games, Packer games, Cub games, White Sox games and even Chicago Bulls games where we marveled at the play of Michael Jordan. In 1990 I attended a baseball game in Japan while on a business trip for Danaher Industries, and later on a business trip to Denmark for Tri-Clover I attended a professional soccer game. 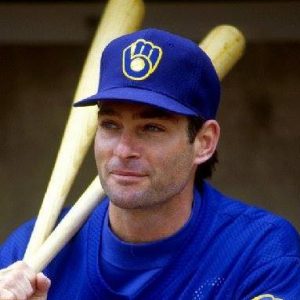 “Molly”…one of the great ones

One of the suppliers I worked with at Tri-Clover manufactured our high-tech stainless-steel tubing. They were located in East Troy, Wisconsin not too far from the Tri-Clover facility in Kenosha. The sales manager, “Jerry” invited Ann and I to attend a Milwaukee Brewer game along with him and his wife.  It was a night game and they were playing the Minnesota Twins. We had great seats, about four rows in, right near 3rd base. As a bonus, Paul Molitor was playing that night, but now, after a great stint with the Brewers, he was winding down his career as a designated hitter (DH) for the Twins, who he would go on to manage after his playing career was over.

The game was well attended and there was a festive atmosphere in the stadium. It was the 2nd or 3rd inning and Jerry and I were distracted by a group of young people who were singing and dancing in the seats and aisle just behind us. None other than Paul Molitor comes to the plate. He hits a screaming line drive that hits the fence top rail and ricochets straight at us. Hearing the crack of the bat, I turned back just in time to see it happen, and tried to put my hand in front of Ann’s face, to prevent the ball from hitting her. Before my hand even moved, however, the rocketed ball smacked Jerry right in his face, just as he was turning back.

Jerry goes down like a pole axed steer. Stunned, the three of us attempt to get him up, but he’s out colder than a cucumber and his face is swelling to the size of a melon. I poured some beer on my handkerchief and dabbed it on his face, after which he started moaning a bit. Soon, stadium attendants came down and with Jerry now conscious, took him, with us in tow, to a first aid station.

At the station, Jerry was tended to, and when it was determined that he was in no imminent danger, we were instructed to take him to the nearby hospital emergency room. (They made sure to inform his wife that the team was not responsible for any injuries incurred at the ball park)

We left the stadium with a very groggy Jerry, and drove to the hospital as directed. X-rays showed he had a mild fracture on his cheekbone and he was kept overnight for observation. His wife stayed with him, while Ann and I went home. The next day I contacted Jerry’s wife who told me he was ok, but would be home for a few days.

I don’t remember who won the game we attended, and about two weeks later Jerry visited our plant on business. As his eye glasses were smashed by the line drive, he sported a new pair…along with one of the best (worst?) shiners I have ever seen.

To rub salt in his wound, Jerry had called County stadium to see if he could get the ball that hit him, as a souvenir. The stadium declined his request so he wrote a letter to the Minnesota Twins asking for a signed Paul Molitor baseball. I’m not sure if he ever got his signed ball and haven’t been in contact with Jerry since I left the company several years later.  Ann and I still attend Brewer games now and then, and remember well, the game when Jerry got clobbered. 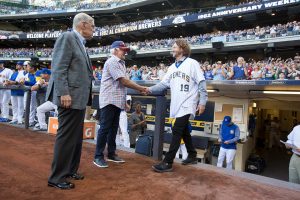