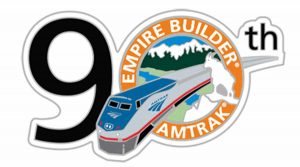 Ann and I recently took a railway trip to the Pacific Northwest. We visited our friends George Dooley and his wife, Diane Neubert who live near the town of Sequim, Washington. You cannot become a citizen of Sequim until you learn how to pronounce it properly, which I have yet to do. George and Diane graciously hosted us in their beautiful home, and took us all around the area site seeing. 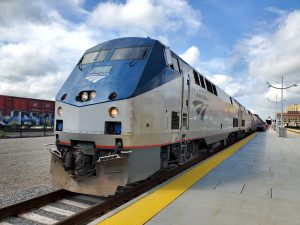 We elected to take the Amtrak so we could enjoy the scenery on the way out and back, and to avoid endless hours of driving. We took the Empire Builder route, which runs between Chicago and Seattle. We boarded in Milwaukee, and disembarked at the end of the line in Seattle. The trip took two days each way.

To avoid being confined to a seat for two days, without the opportunity to bath, (applause here) we reserved a sleeping room. The room had two large seats, facing each other, and a fold down sleeping bunk just above them. The two seats folded down into a bed at night. The room’s large picture window was excellent for viewing all of the scenery. A bit Spartan, the room had one electrical outlet and not even enough room for a standing person to turn around. It reminded me of the sleeping quarters of the World War II Submarine on display in Manitowoc, Wisconsin. The upper birth, which required a bit of acrobatics to get into, included some safety webbing which you had to hook up once in…to avoid falling out. There was little room for tossing and turning, and this was one of those times when being short was not a disadvantage.

Each sleeper car had an upper and lower floor, with one and sometimes two bathrooms on each floor. The bathrooms were about the size of a telephone booth, as were the showers. Some cars had complimentary coffee and orange juice in the morning, bottled water was also available, if you could hunt it down. Meals were included with our package. On the way out, the dinning car was four cars down from ours.  No one, would mistake the Amtrak for Japan’s smooth riding bullet train. We would occasionally reach the speed of 79 MPH, but more often we traveled slower in consideration of the condition of the track and terrain. The train juked and jerked frequently all along the trip, banging noises of one kind or another were common. Passengers walking through the cars to get to the dining or viewing car were subjected to tossing from side to side, as well as a shower between cars if it happened to be raining outside, as the seal overhead had obviously failed. Our engineer on the way out blew the whistle at least once every three to five minutes, we thought maybe he had his children along with him. Being very close to the locomotive, the blowing whistle was an annoying feature of our trip, especially while trying to sleep. 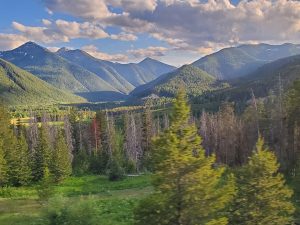 The train made quite a few stops along the way, picking up and dropping off passengers. On some of the longer stops you could get out and stretch your legs. Experienced train riders would be out power walking during these stops, some of them had running suits, expensive tennis shoes and were quite impressive in their walking regime, as opposed to me who wondered aimlessly up and down looking for a vending machine. (Yeah, I’m a slacker)

Despite the little quirks and inconveniences, we enjoyed the train ride very much. Much of the scenery was spectacular, and we could sit and take it all in through our large picture window.

Once we arrived in Seattle, we gathered our 4 sets of luggage, (I travel with Dianna Ross) we then took a cab to a large ferry boat which took us across a bay where our friend George picked us up.

During our visit, George and Diane took us site seeing to several beautiful parks. We saw Olympia, Dungeness, and Buckhorn just to name a few. The area is full of interesting scenery and historical points. During World War II, heavy gun emplacements were set up in the bay, on both the U.S. side as well as the Canadian side, in anticipation of a possible invasion from Japanese military forces. They were quite impressive. I hope to write about these in detail in a future blog article. 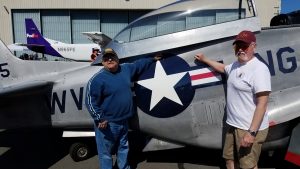 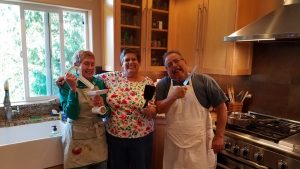 Cooking with Diane….and no casualties!

During one fun filled afternoon, Ann and I shared our families Italian sausage recipe with George and Diane. The four of us got to work and made about five pounds of Italian sausage, some of which we grilled for supper that night. Our sausage making parties are always fun, and this one was no exception. Everyone kept all of their digits and no mishaps of any kind befell us.

On our own for a bit

After several days, we thought we’d give George and Diane a break. We rented a car and drove down to Oregon, site seeing on our own. We then turned back and settled near Mt Saint Helens, which we toured for two days. Ever since the eruption back in 1980, I had wanted to visit this area. I was not disappointed, taking in the still visible devastation, the magnitude of that event is mind boggling. I hope to include this in a future blog article also.

More fun before we departed 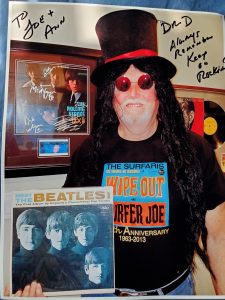 My friend George is currently a disc jockey at KSQM 91.5. George, aka “Dr D”, plays all that good old Rock & Roll, and shows from the station air over the internet as well. I had fun as a guest on George’s show one day while there, while throwing a plug for my books at the same time.

George and Diane are both active in the Sequim Lions Club, taking part in activities to assist others in the community. The day before Ann and I left, the Sequim Lions Club had a “Crabfest” which raised a nice sum of money to support their causes. I had a lot of fun helping out with the event, and Ann and I both enjoyed the festivities of live music, raffles, food and drink. 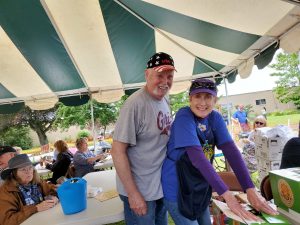 Our wonderful hosts at Crabfest

The next day, Ann and I drove back to Seattle, and took our train ride back to Wisconsin, getting into Milwaukee two days after we left. We had a very enjoyable trip, seeing many wonderful sites. We very much enjoyed visiting with George and Diane, who shared their home and their time with us. Two nicer people would be hard to find.

Share this…
◀ One Ticket to Paradise!
Guest Writer – Penni Evans; Frozen in Bronze ▶