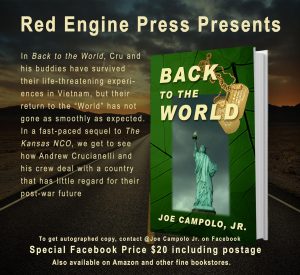 BACK TO THE WORLD, THE SEQUEL TO THE AWARD WINNING NOVEL, THE KANSAS NCO, BY JOE CAMPOLO, Jr.

Pittsburgh PA., May 16, 2016 — Red Engine Press announces the release of the new book, Back To The World, by bestselling author Joe Campolo, Jr.

Joe Campolo, Jr is the author of The Kansas NCO – an award winning novel about an Air Force senior NCO (non-commissioned officer) who runs what is possibly the largest black market operation of the Vietnam War. Joe served in the United States Air Force from 1968 to 1972, serving in Vietnam all of 1970.

Joe states that since The Kansas NCO was released, many readers have asked me to write another book. In “The Kansas NCO,“ I wanted to convey what life was like for the typical GI’s serving in-country during the Vietnam War. I also wanted to enlighten people regarding some of the graft and corruption that took place throughout that war. I wanted my second book to convey factual information of the time, so I wrote a sequel, using the surviving characters from The Kansas NCO to depict what life was like for returning GI’s.

“I am tremendously excited with Back to the World the sequel to Joe Campolo, Jr.’s award-winning freshman novel,” The Kansas NCO, said Joyce Faulkner, co-owner of Red Engine Press. Campolo’s Back to the World follows Cru and the gang as they try to adjust in a world that doesn’t understand what they just went through and, the men suspect, don’t care. Pat McGrath Avery, co-owner of Red Engine Press adds, “Back to the World is a rough and ready action story, the men struggle to find not just their lives as civilians again…but their souls.”

Joe has been married to Ann for almost thirty-four years and resides in Kenosha, Wisconsin. They have two adult children and two grandchildren. Joe enjoys nature, art, fishing and writing. Visit joe on line at:   namwarstory.com

For more information on this book or to schedule an interview email: info@theauthorszone.com

Share this…
◀ What people are saying about “Back To The World”
Guest Writer – Emily Strange; RIP (Donut Dollie) ▶