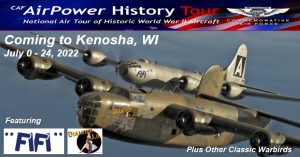 This past week the Commemorative Air Force Air Power History tour exhibited at the airport in our fine town of Kenosha, Wisconsin. They brought a B-24 Liberator, a bi-plane, a T-6 trainer, and the star of the show; Fifi, a B-29 Superfortress. 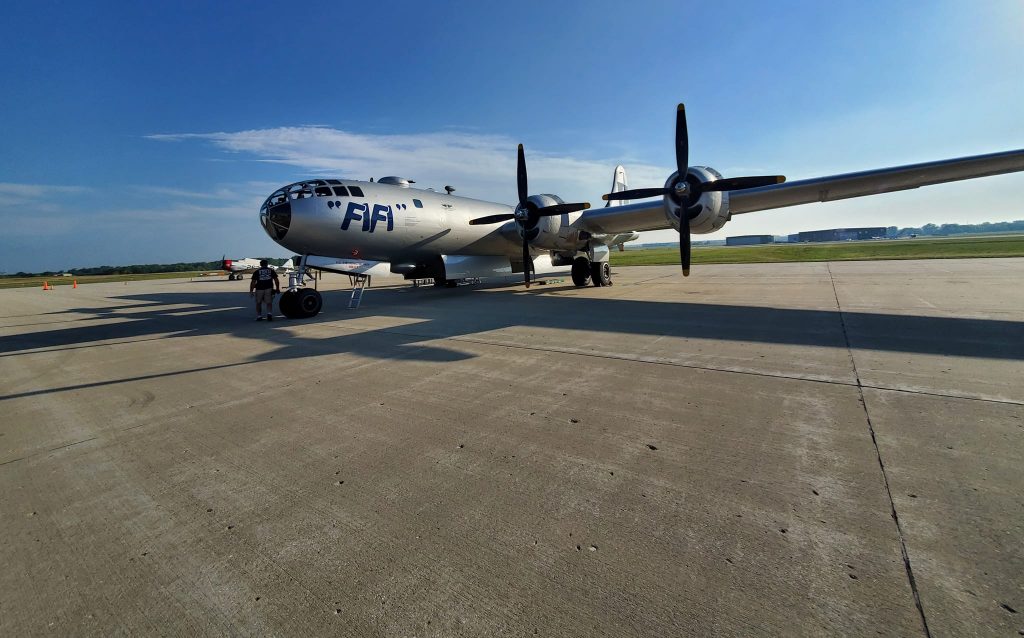 The star of the show

The B-29 has a prominent role in my book Three Wars, so I was looking forward to their visit.

The B-29, built by Boeing, superseded the B-24 and B-17, and preceded the B-36 and the long lived, still operational B-52. The B-29 was the first aircraft to use pressurized compartments, allowing the ten-man crew the ability to function at high altitude without the use of masks.

The B-29 was also the first aircraft to employ a computer. The rudimentary device helped control the ten fifty caliber machine guns and rear 20 mm cannon.

The aircraft could carry up to twenty thousand pounds of bombs, had a range of 5,830 miles and cruised at about 220mph. Four 2,200-horsepower Wright Duplex Cyclone engines, powered the lumbering aircraft.

The B-29 came on duty late in WWII, and began by pummeling Japanese positions in China. When U.S. Marines and Soldiers cleared Saipan of Japanese troops, runways were built, and the B-29’s began the heavy bombing of Japan itself. And of course, B-29’s dropped the atomic bombs on Hiroshima and Nagasaki.

True to form, the Soviets stole, and then copied the B-29 to come up with the Tupolev TU-4. Close allies Great Britain and Australia were provided with B-29s for their defense.

When the Korean war broke out, the B-29 was used in the bombing of troop concentrations, but proved to be a better fit, strategically bombing targets in North Korea. 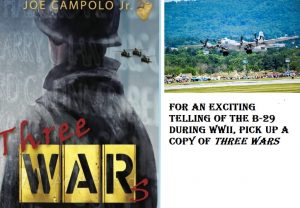 Three Wars, the last book of The Kansas NCO trilogy, is a prequel. Since all the characters in the book, and the real men who the characters were based on had fathers and uncles who were World War II Veterans, I thought it’d be good to bring them back to life, to complete the trilogy. 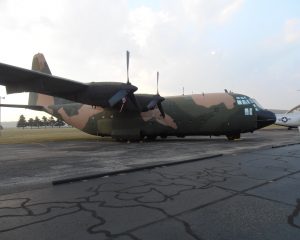 My father, and several uncles served in WWII, including one, (Uncle John) who was killed in the war. My closest friend during my time in the Vietnam War was Larry Montrie. Larry and I have remained close friends since those days and he is also my confident, providing enormous energy and help in the on-going Kansas NCO film project. 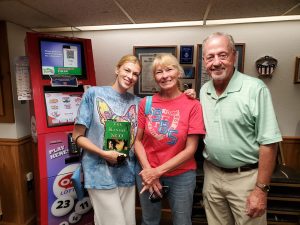 Charissa, our screen writer with her mother, and my good friend and confident Larry

Larry’s father was a B-29 pilot in WWII. He flew numerous missions flying the big bird, and shared many stories with Larry.

So, the tie in to our ancestors is real, and worked very well in the book. I did quite a bit of research to learn about the various weapons systems of WWII, and the B-29 was the most intriguing of all. I even joined a B-29 Facebook group, to scarf up as much knowledge on the big bird as possible. 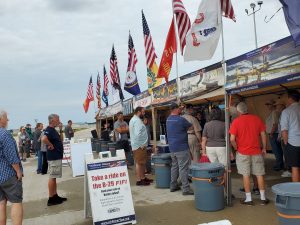 When I heard about the Commemorative Air Force air show in Kenosha, I contacted them and told them about the B-29’s role in Three Wars. They kindly invited me to have a book signing during the event, and even provided a space for me in their tent. 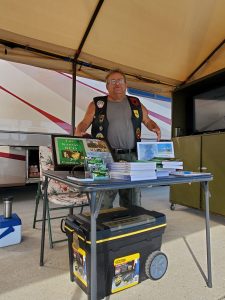 The first day, I arrived early and set-up my book table in the tent. Then I went out and got a good look at all the aircraft they had brought. Naturally, I spent most of the time hanging around the B-29, and although I’d seen one before, I got a much more thorough look this time. A truly impressive aircraft!

Many of the people who came to see the aircraft during the week, stopped by my book table to chat. Some purchased books as well, and shared their connection to the B-29. There were many interesting stories, including one individual who is attempting to write a book on his experience. After we chatted awhile, he left with my contact information. When he is ready to start his book, I will try and help him with it.

The show benefited from good weather most of the week, and although it was a bit hot a few days, most of the time conditions were great. On Saturday and Sunday, the birds flew, taking passengers on a short ride out over Lake Michigan and back. What a thrill for those who did.

I enjoyed my time with the Commemorative Air Force air show very much, and am appreciative for being included in the event.

And Fifi….until we meet again! 🙂

You are welcome to share Joe’s blog stories, in their entirety citing Joe and/or his guest author as the creator. Copyright protected © all rights reserved, Joe Campolo Jr