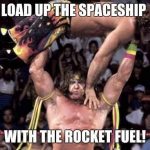 The Ultimate Warrior in action

Screw the rules, I make em.

My son Billy and his pals recently hooked up for one of the WrestleMania events. They’ve been doing that since they were kids, and they still enjoy watching the slapstick hilarity whenever they get the chance. And Billy’s now passing the tradition down to my grandson John. John will be the fifth generation of my family to enjoy the antics of the professional “grapplers”. 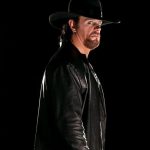 Way back when I was a kid we would watch professional wrestling every Saturday afternoon on TV. Often it would be my brother and I, along with one or two friends. My dad would also watch if he wasn’t administering first aid to one of the many used Ramblers he drove, or one of the neighborhood kid’s bikes. My Grandfather who lived with us for a time also enjoyed the wrestlers; so long as his favorites were winning.

Slammin Sammy Menacker hosted the Saturday afternoon TV bouts for many years. Sammy was a retired “professional wrestler”, so he knew the ropes, so to speak. Sammy was a “good guy” and often quarreled with the “bad guys” or “heels” that performed on the show. 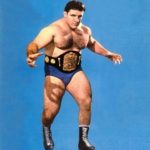 We all had our favorite wrestlers, and of course the different generations had favorites mostly from their own generation. My dad was a fan of Gypsy Joe and Gorgeous George in his earlier years. Later he came to like Bruno Sammartino, Vern Gagne, and Lou Thesz, among others. He wasn’t quite as passionate about wrestling as the rest of us; he lived in the real world and had little time to dwell on such fantasy.

My grandfather was by far the most excitable family member regarding the weekly grappling performances. Normally he stayed in his room, not one to bandy about with the younger generations; but come three O clock Saturday afternoon; he was parked in front of the TV along with the rest of us. Being from the “old country”, he of course favored any wrestler of Italian ancestry. And above all others he loved Argentina Rocca, the popular Italian wrestler who hailed from South America.

Normally the wrestling bouts featured a “good guy” VS a “bad guy”. However once in a while two “good guys” would wrestle each other, and when that happened everyone would frown and leave the room for bathroom breaks and such. Those matches were yawners as far as we were concerned; good VS evil was where the action was! 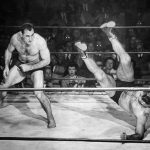 Argentina Rocca tosses another one

My grandfather’s demeanor would change considerably during these wrestling events, especially if his buddy Argentina Rocca wrestled. He would pump his fist, grumble and stew, as the “bad guy” predictably worked over the agile Argentinian for the first few minutes of the bout. The referee would come under particular derision from him, and when Argentina Rocca finally turned the tables on the villain Grandpa would jump up, shake his fist and yell “die you somabitch, die!” Occasionally the villain’s chicanery would be too much for the old man; he would stomp his one good foot, march into his bedroom, slam the door and refuse to come out for the rest of the day. When this occurred, no amount of coaxing by my Mother could lure him out. (Other members of the household felt no need to rush him) 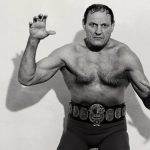 After the matches were over my best friend and I would either go in our backyard, or to an empty lot behind his back yard where we’d reenact the wrestling events. Although we pulled most of our punches, things frequently got out of hand and we always ended up with scrapes and bruises. My friend was much bigger than I, but I was scrappy so it was never certain which way these bouts would go.

And while my buddie’s favorite wrestler was Killer Kowalski, I was a Dick The Bruiser (real name Richard Afflis) fan all my life. Maybe it was because he was a member of the Green Bay Packers football team at one time, or maybe it was something else, I just liked him. He looked the part, acted the part, and with his gravely voice sounded the part.

Occasionally big time wrestling would come to our fair city of Kenosha, Wisconsin. When it did it was usually at the Eagle’s Club downtown, or Simmons Ball field. Sometimes my dad would take us and we would have a great time eating hot dogs and yelling at the wrestlers. When they wrestled at the ball park you could stand outside the fence and see quite a bit of the action. This suited us fine considering our always precarious financial condition, and besides it was always more fun to “sneak”. Grounds crews would shag us away, but we’d return as soon as they were out of sight.

I kept up with pro wrestling even during my military service. In Vietnam a couple of my buddies and I often worked our own slapstick routine; it was a good way to lighten the mood in a place where the mood badly needed lightening. We’d usually do The Three Stooges, or our very own professional wrestling shtick. The Vietnamese got a real kick out of our antics. A few of them wanted to be included so we let them in on the fun. Some of them didn’t realize we were pulling our punches and had to be cautioned occasionally for over doing it. They weren’t very big, but they were tenacious! 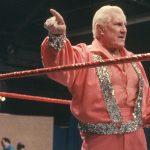 Back in the states and now stationed in Southern California a bunch of us went to a professional wrestling event in downtown Los Angeles one Saturday night. Classy Freddie Blassie was one of the headliners on the program. He was wrestling one of the more popular Mexican professional wrestlers that night. In classic Blassie style, Freddie blasphemed by snatching the Mexican wrestler’s sombrero off his head and wiping his backside with it. The largely Mexican crowd erupted in rage and law enforcement had to be called in to quell the disturbance. We beat feet out of there mucho pronto! 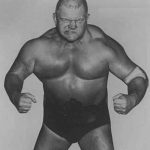 The one and only “Bruiser”

Over the years, as with many things, wrestling evolved. “Da Bruiser” and “Da Crusher” gave way to Hulkamania, and many other stars that followed. Wrestling became huge with mega arenas and mega ticket prices to match. I faithfully watched my Bruiser who performed well into his fifties. Old, slow and arthritic “Da Bruiser” was still a huge draw and also did some commentary after he retired. Sadly Dick The Bruiser passed away at the young age of sixty two. But his wrestling legend lives on as reruns of his old matches play on TV, YouTube and DVDs.

You are welcome to share Joe’s blogs on Facebook or any other media, in there entirety with citation acknowledging Joe as the author. Joe’s work is copyright protected ©.