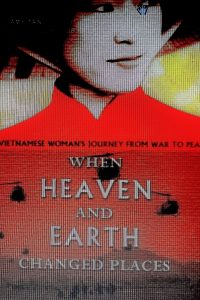 My friend Le Ly Hayslip, a Vietnamese refugee, escaped Vietnam in 1970, the same year as my military service in that war torn nation. I did not know Le Ly at that time and would not come to know of her until I read her amazing book When Heaven & Earth Changed Places, published by Doubleday in 1989.

In April of 2020, Le Ly’s charitable foundation, the Global Village Foundation will be conducting a pilgrimage back to Vietnam, where the many works previously accomplished will be seen. Le Ly is inviting all of us to join her, to continue on her amazing journey. Below are details of Le Ly’s book, her invitation to join her on the pilgrimage in April, and a link with specific details on the trip.

It is said that in war heaven and earth change places not once, but many times. When Heaven and Earth Changed Places is the haunting memoir of a girl on the verge of womanhood in a world turned upside down. The youngest of six children in a close-knit Buddhist family, Le Ly Hayslip was twelve years old when U.S. helicopters landed in Ky La, her tiny village in central Vietnam. As the government and Viet Cong troops fought in and around Ky La, both sides recruited children as spies and saboteurs. Le Ly was one of those children.

Before the age of sixteen, Le Ly had suffered near-starvation, imprisonment, torture, rape, and the deaths of beloved family members—but miraculously held fast to her faith in humanity. And almost twenty years after her escape to America, she was drawn inexorably back to the devastated country and family she left behind. Scenes of this joyous reunion are interwoven with the brutal war years, offering a poignant picture of Vietnam, then and now, and of a courageous woman who experienced the true horror of the Vietnam War—and survived to tell her unforgettable story.

When Heaven and Earth Changed Places was, and still is a hugely popular book. It’s popularity brought attention and fame to Le Ly, and she maneuvered that fame into support for an organization she founded, to help the many Vietnamese who were still suffering as a result of the war. Her first organization was the East Meets West foundation and second, The Global Village foundation, initiated to help rebuild Vietnam, was later expanded to provide assistance to all Asians in need, as well as those in need in Africa.  Many U.S. Vietnam War veterans have traveled to Vietnam as part of the foundation, assisting the Vietnamese in any number of ways.

And now, thirty years after the start of the East Meets West foundation, Le Ly is facilitating a pilgrimage to return to Vietnam in April of 2020. She is inviting one and all to join her, to view the work that has been done,and to participate in on-going projects.

Here is Le Ly’s letter of invitation, followed by a link with a detailed description of the trip.

Greetings from The House of Peace in Escondido, California!

Wishing you and your family the best for 2020! From 1989-2019 have been filled with accomplishments that I am excited to share with you. 2020 will mark forty-five years since the end of the war in Vietnam and twenty-five years of U.S./Vietnam reconciliation and full diplomatic relations. Most important is thirty years of service the East Meets West Foundation. Your help and support over the past three decades have helped bring Vietnam out of poverty to become the strong and developing nation it is today.  All started from my risky  journey home in March 1986. Then, on February 5, 1989, Los Angeles Times Magazine released a short story of my life called “The Other Side- Growing Up in the Viet Cong.” On May 17, Eva Hoffman from the New York Times wrote an article called “Books of The Time.” On June 25, 1989, the New York Times Book Review published David K. Shipler’s entitled “A Child’s Tour of Duty” on its front page. These reviews of my book When Heaven and Earth Changed Places sent shockwaves through the nation with strong voices from the “enemy’s” side drawing on the principles of love, forgiveness and compassion.  From that day forward my life story has been covered in hundreds of newspapers and other media, national and international alike. The goal was to give a voice to all war victims, whether American or Vietnamese. With all the publicity, Oliver Stone optioned my two memoirs,  for the third movie of his Vietnam trilogy, “Heaven & Earth.” That drew more attention to the topic. 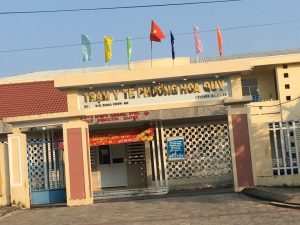 The best accomplishment occurred in 1989 when our new organization, East Meets West Foundation, received permission from both governments of the conflict countries to operate in them. That threw me into action to work hard to bring both sides together. The East Meets West Foundation was authorized to construct a 1,500 square foot seven room medical clinic in the village of Ky La. We then sent three U.S. Vietnam veterans back to Vietnam for a different “tour of duty”- helping the villagers build Mother’s Love Health Clinic in my village, funded by Oliver Stone. We completed the project on schedule to report to the U.S. Department of Treasury as the trade embargo was still in force. 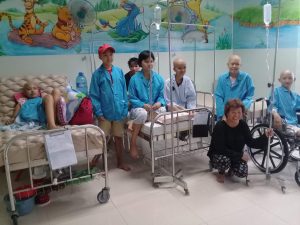 As we look forward to the next 30 years, there is still a lot of work to be done. We cordially invite you to join us for a “Heaven & Earth Pilgrimage” to Vietnam in April 2020. You have a front row seat to not only see, but also sow the fruits from “Labor of Love!”  Come be a part of the many successes of our humanitarian work for the last 30 years. Please invite others to come with you – to help contribute funds to those children who need your help the most.

Our goal is to raise $30,000 to commemorate the last thirty years. These funds will be donated to children with cancer at the anniversary ceremony at the Heaven & Earth Pilgrimage site in Danang, Vietnam. The event will also honor Hiep Thi Le, who played the role of Le Ly in the film “Heaven & Earth.” I am also a cancer survivor. Before Hiep passed away in December 2017 from stomach cancer, she and I pledged to help these children with this disease who perhaps could become healthy again and live to help other children in the same predicament.

Thank you for your kind support that has helped to exceed my humble goal of thirty years ago! We couldn’t have done it without you! Please continue to support our cause so we can help the children suffering with cancer in Danang.

Happy Holidays and a great new year! Thank you with deepest gratitude! 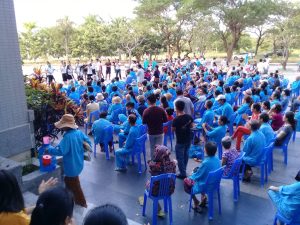 Copyright protected, all rights reserved © Joe Campolo Jr, You are welcome to share Joe’s blogs in their entirety, crediting him, or his guest writer when applicable, as the creator

Share this…
◀ Book Orders
Flying the Friendly Skies of Vietnam (published in The Kenosha News, 1/26/2020) ▶