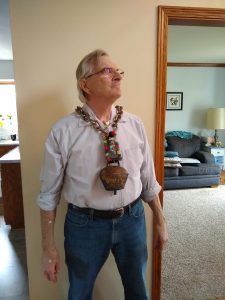 Rick Wehler is a humorist and a published author. Many of Rick’s stories are posted on his Facebook page. His books are a compilation of stories in which Rick relates some of his life experiences, through a slightly twisted but humorous slant.

Rick has shared some of his stories with me, so I can share them with others. An adventurous outing at a bingo game with his wife Cora, is the subject of this article. I believe you will enjoy Rick’s Bingo game adventure. 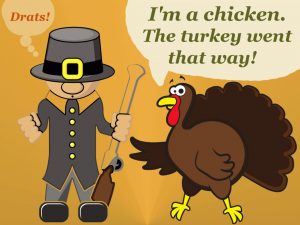 My wife, Cora, and I had chosen the weekend before Thanksgiving to visit her Ma, her brother Richie and his fiancée Debby in their Northern Minnesota hometown, population 1,000, rife with Norwegians.

Upon our arrival, Ma informed us of the family events for that evening: a heart-healthy meal of the best broasted chicken around, lovingly prepared by the gourmet chefs at The Deer Creek Feed and Bleed, followed by the V.F.W. Turkey Bingo Fundraiser.

After gobbling all the fowl we could stuff, our group proceeded to the Community Center in time for the gaming. Even though my poor luck at gambling had become family folklore, I did not wish to earn an additional rep as party pooper and agreed to attend the function.

The building’s interior was crammed wall-to-wall with lunchroom-type tables, a myriad of clanking metal folding chairs and hundreds of local residents. I couldn’t help but wonder who was milking the cows. Due to the overflow turnout, several sought-after chairs up front uncomfortably accommodated more than one backside each. 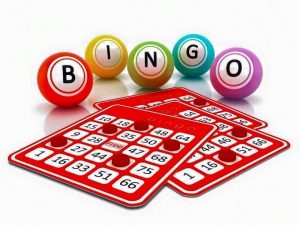 for each of us, although some of the patrons purchased as many as five cards.

We found an unoccupied table with no chairs by the back door. Upon our request, one of the V.F.W. regulars recruited five chairs, which he found hidden out back in the shed. He tramped our way in his jingling, unbuckled rubber boots, fur hat with ear flaps and dangling straps, foggy glasses, well-worn, wet work gloves and an open jacket. He leaned the frost-covered metal folding chairs against our table and accepted our thanks.

All of the event’s officials were located way up in front: Hilde, the bingo machine operator, dressed in a flowered blouse with a flamboyant breast pin, Einar, the announcer, bedecked in his V.F.W. hat bedizened with multiple awards, and Olga, the game’s judge, who sported transparent nasal air tubes, which led into an oxygen tank hidden under the table.

I learned from Einar’s announcement that I was to endure 15 bingo games that evening. Previous to this, I was willingly ignorant of the many different bingo versions—regular bingo, 4-corners bingo, X-bingo, picture frame bingo and black-out bingo. I felt certain that my fabled ill-fortune would continue.

Games 1 through 4 passed uneventfully. All winners were somewhere within Olga’s hearing. Several losers traded in their unlucky cards in hopes of finding one with inherent good fortune. I felt no need to trade my card and reduce my meager chances to zero, like the temperature of my hinder.

Game 5 produced a winner at our table as Richie yelled, “Bingo.” The rules required the judge to authenticate his winning numbers.  Mr. Jingling Boot Buckles was kind enough to act on Olga’s behalf. Yup, Richie’s victory was confirmed. Mr. Ear Flaps opened the back door, retrieved Richie’s prize from the bed of a pickup truck and dropped an 11 lb. turkey on our table with an ice cracking thud. We sensed the envious stares from the multiple-card-holding occupants of adjacent tables.

Game 7, a four-corner game in which the winner must–oh just figure it out–was won by Ma. (None of my four corners participated.) Mr. Foggy Glasses repeated the verification and turkey presentation. Our frozen table guest, the turkey, now had a mate. I didn’t fret about hanky-panky on their part. I believe that frozen turkeys are neutered. We again bore the gaze of jealous rivals.

As Game 8 commenced, I finally found employment for a few of my game tokens upon the bingo card. What, four in a row? Why that’s almost a winner!

I stared at the column’s remaining uncovered position, O-69. I concentrated on the cipher. I moved my lips and spoke it silently, attempting to hypnotize Einar from afar. As I once again mouthed 0-69, I did so in unison with Einar. Wha, wha, what? I, I, won. “Bingo!” Oh yes, Olga heard me alright. A legion of tonight’s neglected cows in a hundred abandoned barns mooed in praise of my accomplishment. 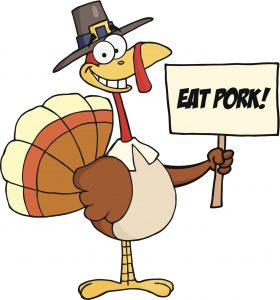 Mr. Well-Worn, Wet Work Gloves once again verified the triumphant numbers and plunked another turkey onto our table. In geometry three points determine a plane. In this bingo hall, three turkeys nearly fomented a riot.

The mood settled a bit as game 9 began. I followed along, even though I was shivering from my chilly chair, the continued icy wind blasts from the back door, the fog radiating from the thawing turkeys, the competitor’s cold stares and my recent good luck. OMG, I filled another full line! Dare I, should I, oh why not? Freaking “BINGO!” I have no doubt that several people at nearby tables soiled themselves. I am fairly sure that I did. Mr. Open Jacket followed his proven procedure with a little extra thunk. We then owned 43 pounds of frozen fowl.

The following game, a blackout–cover all the numbers–was won elsewhere as were games 11 and 12. Game 13, however, was a game that will live in the annals of V.F.W. Turkey Bingo history, as Cora screamed, “Bingo!” Never before had one small group of contestants won so many games.

By now our team was on a first-name basis with our V.F.W. assistant, Jingles, his preferred moniker. He leaned against the building’s back wall with his arms and boots crossed and smiled as he watched the melt water drip from our 54 pound prodigious poultry pile while the final two games were won by other contenders.

We left our lucky bingo cards on the table as Jingles enabled our escape through the back door with our five thawing turkeys and five frozen fannies.

Rick’s books may be purchased on Amazon: