It seems I had been drawn into another lost cause. 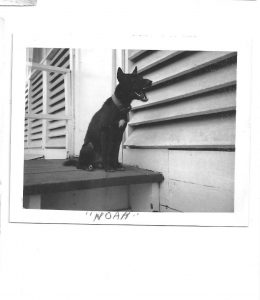 As many know, most of the characters in my books are based on real people. However, one character in my book, Noah, probably has more true to life attributes than most of the others included in my writing. Noah, our hooch* dog at Phu Cat airbase in Vietnam, was quite a character and his mannerisms and behavior are reflected in my book The Kansas NCO, and also in the recent screenplay, written by Charrisa Gracyk. So, Noah, our flea bitten, tick ridden, C-rat mooching hooch dog may someday be immortalized on the silver screen. How in the heck did that happen?

Tim, one of my good friends in Vietnam, was the one who first “adopted” Noah. Noah, like most dogs in the Nam, ran in a pack with other feral dogs. I don’t exactly know how Noah got separated from the pack and became the responsibility of Tim, but one day, much to the chagrin to the rest of us who had to deal with him, there came Tim, with Noah on his heels. 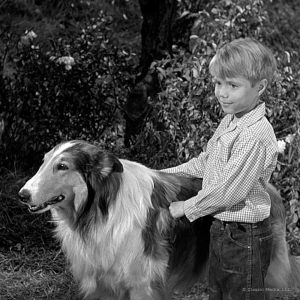 Noah would never be mistaken for Lassie

Not enthralled with the little bugger, I was only one of many who was unwelcoming to Noah. He was about as mangy of a mutt as you had ever seen. As he trotted across the hooch, ticks fell off him like water off a duck’s back. As a bonus, he smelled just like the nearby vermin filled swamp, which fairly steamed in the oppressive Vietnamese heat.

While off duty, Tim would spend hours picking ticks and fleas off of Noah’s scroungy little carcass. A four-legged Romeo, Noah was constantly pestering females in his and other packs as well, earning him a good drubbing at least once a day. (Noah even tried to cozy up with the female German Sheperds from the canine corp) The ever-loyal Tim provided first aid to all of Noah’s bites and scratches. I guess we should have felt fortunate that Tim didn’t adopt one of the local monkeys, as some others had done. Those monkeys, though cute, were nastier than a badger in a bee hive and would bite the heck out of anything within reach. (Our little Noah, on occasion, would also incur their wrath)

A dog’s life during the War

The war was no kinder to animals than it was to humans. The feral dogs were often caught up in various offensive activities at hand, with many being killed as collateral damage in any number of engagements. Battles with other packs, starvation and disease also took their toll, as did providing the local villagers with an additional source of protein. It wasn’t much of a life for the canine critters.

The feral dogs ran around in packs for survival purposes. Of course, many packs consisted of dogs related to each other. I’m not sure how Noah got separated from his pack, but one of the packs in the area of our hooch was certainly his. Noah wasn’t kept on a chain or anything, he was free to run around at will and mostly did when we weren’t around. I’m sure he hung with his old pack during those times.

One day, after a mortar attack on our base Noah didn’t turn up for a while. Worried, we later found him near the body of another dog which was laying in the road dead, killed by one of the incoming mortars. Noah lay quiet with his head on the other dog’s body. From the looks of the other dog, we were pretty sure it must have been Noah’s mother. Noah moped around for a day or two, but was soon back to his mischievous self.

The worm turns for Noah.

After nine months of “fun” in Vietnam I took my R & R. Eight great days in Hong Kong. I left with some trepidation, however, as Noah would now have to fend for himself. (Tim had went home and left Noah in my care) I wasn’t too worried about him finding enough food, he was a class A scrounger and also a class A beggar. I was concerned, however, about his ability to defend himself, as the many detractors he had would have happily dispatched him, given the chance. And as previously mentioned, dogs were on the menu of the local Vietnamese, and my good friends the Korean ROK soldiers who protected our western perimeter also had a fondness for canine cuisine. After I returned from R & R and the dust settled, I pondered Noah’s fate.

Wonder if that damn mutt’s still around.

My question was soon answered as much to my surprise, I found Noah in the company of “the brothers” who were petting him fondly and serving up treats. You could have knocked me over with a feather, as they say, as previously Noah had received much abuse from many of the black members of our unit. They had little patience for him, and often gave poor old Tim a ration of manure regarding the flea-bitten pest he had brought into their midst. This turn of a affairs was indeed startling, however the reason behind Noah’s sudden change of status was even more startling. 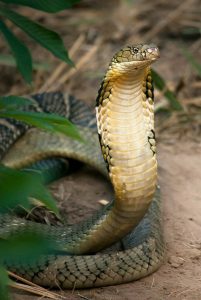 No match for Noah!

As the story goes, one day while I was on my R & R, Noah surprised and attacked a cobra that had slithered into our barracks. The large snakes would often enter our dwellings, as the dwellings were inhabited by large rats who came in for shelter and left-over food. Though a danger to us as well, the cobras were primarily after the rats, which was one of their primary food sources.

Those who witnessed the incident claimed Noah and the snake fought for almost fifteen minutes before Noah subdued the reptile by biting it behind the head and shaking it mightily. After the battle, Noah, himself bitten several times, laid down for the rest of the day. Feared dead, no one thought to get him any medical attention. But plucky Noah, after only one day, was up and around and back to his old self.

After the cobra incident I was off the hook regarding Noah’s care. That worked out well, since most of my last couple of months in Vietnam were spent in a small Korean army (the ROK’s) bunker on our western perimeter. And although I was made comfortable among those stalwart warriors, like the Vietnamese, the Koreans would have happily added Noah to the dinner menu. 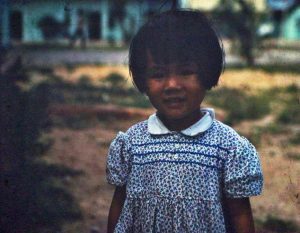 Some good byes were harder than others

During my last couple of days in Vietnam I visited the local orphanage one more time, spent time with our old mama san and her family and visited the kids who hung around the main gate selling “stuff”. (They always thought I was a mark) I said goodbye one more time to all of my friends; American, Vietnamese and Korean.

An Air Force pick-up truck took me and my gear to the flight line, where I would leave Phu Cat on a C-130 to Cam Ranh Bay. About two days later I’d get on a Flying Tigers DC-8 Freedom bird for that long-awaited trip back home.

While still at Phu Cat, I was surprised when Noah showed up at the hooch and ran behind my pick-up truck all the way to the flight line. Once out processed, I sat on the flight line with the little rascal, until it was time to board. I gave him one last bit of petting and told him to watch over mama san and baby san for me. He gave me one last mischievous look, turned around and trotted away.

*Hooch: any dwelling or living quarters

Linkedin
◀ Quote to make us laugh
We are indeed, all in this together. ▶