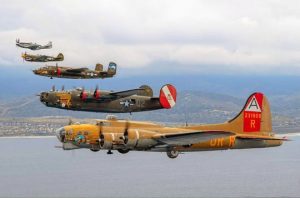 In June of this year, along with my friend George Dooley, I attended an air show in Port Angeles, Washington. My wife Ann and I had spent two weeks in the Pacific Northwest, taking in many fantastic sites while visiting George and his wife, Diane. (Reference earlier blog article Amtrak Empire Builder, to the Pacific Northwest)

Being a couple of old Air Force vets, George and I took in the air show at the William R. Fairchild airport. Sponsored by the Collings Foundation, the air show is part of a nation-wide tour, featuring various aircraft from the World War II era. And although we didn’t elect to do so, air show attendants were also able to take a short flight on many of the featured aircraft. (For an impressive fee) 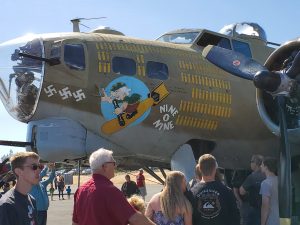 One of the aircraft in the show, was a B-17, dubbed “Nine of Nine”, Serial number 93012. The four-engine heavy bomber, was certainly one of the more impressive birds at the show, with its massive frame and colorful markings. Tragically, a few months after we saw the aircraft, while on another leg of the tour in Windsor Locks, Connecticut, “Nine of Nine” crashed, claiming the lives of seven people and injuring eight others. National Transportation Safety Board (NTSB) reports on the incident point to discrepancies with inspection and maintenance frequencies, as being the possible cause.

Ironically, George would soon cross paths with another B-17 crash site, as he and a group of his friends held their annual back packing gathering, in California. Here, in his own words, is George’s story.

On October 31, 1941, a B17C, also known as a “Flying Fortress” took off from Ft. Douglas Army Air Base, its home base near Salt Lake City, Utah, on a routine flight to an Army Air Force service depot in California to change the No. 3 engine.  The bomber’s flight plan would take the plane to Douglas Army Air Base to Mather Air base in Sacramento.

Due to bad winter weather conditions over the Sierra Nevada range in California, the crew of nine men laid over in Reno, Nevada for two days.  Then, after the weather cleared somewhat, they departed for Mather Army air base during the morning of November 2nd 1941 on what would be the last flight of the B-17c bomber.

Flying west, the aircraft passed over Lake Tahoe, and entered into overcast sky.  The pilot, 1st Lieutenant Leo M. H. Walker, continued on to Mather Army Air Base.  Then, the No. 1 engine supercharger began to have problems maintaining pressure.  The pilot put the B-17c in a climb towards 14,000 feet.  The co-pilot, 2nd Lieutenant John R. Mode, adjusted the No. 1 engine supercharger control to add pressure to the engine, and the flight continued westward. 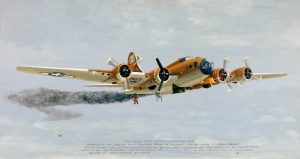 Bailing out of a damaged craft is never a sure thing

After a while longer, the flight control indicators ceased working correctly; 1st Lieutenant Walker, decided to head back to Reno.  As the pilot attempted to gain additional altitude, he realized he was having serious trouble controlling the plane.  At that time, he ordered the crew to put on their parachutes, and be ready to bail out of the aircraft.  Shortly thereafter, Lieutenant Walker lost control of the aircraft.  He futilely attempted to regain control, but the B-17 rolled over onto its back, and the plummeted into a spin towards earth.

The flight crew starting to bail out of the airplane.  One crewman Corporal Sterling Isom, was thrown through a Plexiglas gunner’s turret into the air.  Another crewman, Private Alden Stookey, was thrown out of a rupture in the fuselage, as the plan began to disintegrate.  Several other crewmen managed to escape when the tail section of the plane was sheared off because of the excessive stress on the plane’s frame due to the rapid, out of control, descent.  When the flight crew opened the escape hatch, the flight engineer, Staff Sergeant Eugen M. Clemens, was thrown from the plane.2nd Lieutenant Mode drifted earthward in his parachute, witnessing debris from the aircraft falling around him.  Of the nine-man crew, eight survived. 1st Lieutenant Walker, the plane’s pilot failed to escape; he went down with the plane.

On a recent trip (summer 2019) to the high Sierra’s with my buddies, some of which we have been hiking together for 40 years, we were fortunate enough to come across a bit of military history. 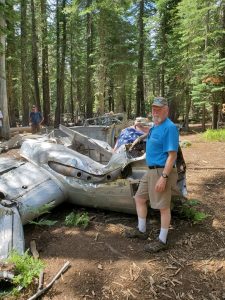 George at the crash site

We had been told by some of the locals who live around Loon Lake where we camp, of a trail that would lead us to the wreckage of this B-17C.

Hoping to find this unmarked trail we set off in search of the many dirt roads in the surrounding area.  After about an hour we thought we had found the trail.  There was another car there which we hoped were seekers also.

We started down the trail one by one through brush and manzanita bushes for the trail was overgrown.  About a mile and half in we stopped some other people on the trail and asked if they had spotted the plane.  They said they did and it was about another half mile.

The heavy cover of the forest made it difficult to see but we did see something flashing in the distance.  The sun as it weaved through the trees found its way onto something metal. 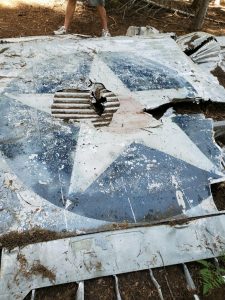 As we got closer, we noticed it was the wing of the bomber.  What we were looking at was the Right-wing section which was laying upside down.  We also saw the outer engine mounts but both engines had been removed.  The Army Air Force insignia was still visible on the wing.  We were told there was other plane debris in the area but couldn’t find it.

B-17 facts, and other incidents

In researching this story, in addition to the downed aircraft that George and his friends happened upon, I found some other “B-17 graveyards”, which are also points of interest for hikers and aficionados of military history. One is on Fortuna Peak, near Wellton, Arizona, while another lies in the Roosevelt National Forest near Bellvue, Colorado. The Arizona crash happened on June 28, 1944. The cause was thought to have been the result of a navigational error. The B-17 crash near Bellvue, Colorado occurred on June 13, 1944, with the cause of that incident having never been determined. 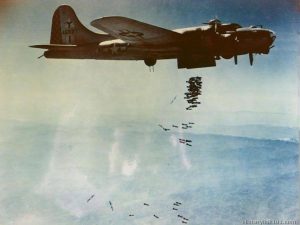 The B-17 suffered some horrific losses while fulfilling its mission during WWII. And though many other B-17’s have crashed over the years, most have not had the distinction of being designated as a National Park Feature. Developed in the 1930’s, over the course of it’s lifetime Boeing built some twelve thousand, seven hundred and thirty-one B-17’s. Primarily designated as a day time strategic bomber, the four-engine aircraft had a range of 2,000 miles, and a payload of 4,800 pounds of bombs. It cruised at 250 miles per hour, at an altitude of 10,000 feet. In addition to its role as a heavy bomber in WWII, the B-17 was also employed in an anti-submarine capacity.

The ever-studious Germans, during WWII, determined that it took a minimum of 20 hits with a 20 mm shell to bring down the B-17. The B-17 was reverse engineered by the Germans as well as the Soviets, both hoping to take advantage of its success. In the post war years, the B-17 was used to study nuclear mushroom clouds at close range, and also somewhat in the study of hurricanes.

It is believed that some forty B-17’s are still in existence today, with perhaps ten of those being air worthy. Those remaining B-17’s will still appear at air shows, and though accidents may occur, the distinct aircraft with a loyal following will continue to be flown throughout the world, until the last one is gone.

Share this…
◀ Guest writer – Tom Keating; A Convoy for an Elephant
The Veteran’s Road ▶