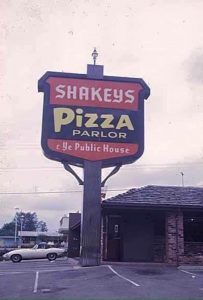 For a time, back in the early 1970’s, I worked part time at Shakey’s Pizza Parlor in Riverside, California. I was stationed at March Air Force Base, where I had eighteen months left of my four-year Air Force hitch. I had served one year on the frozen tundra of North Dakota, and one year in the steaming jungles of Vietnam, and I finally landed some good duty.

By the time I got to March Airbase, I was a Staff Sergeant, pulling decent money and benefits. Moreover, I now had an office job in an air-conditioned building, with an 8 to 5 schedule, five days a week. After a short time on base, I was given quarters allowance, providing me with enough money to live off base. I rented a house with three other GI’s and of course, it soon became “Party Central”.  I was practically a civilian.

After a couple of months, the heavy partying started wearing down my bank account. I also realized I needed a better way to spend all of my free time, so I started attending classes at Riverside City College. And I looked for a part time job.

The Riverside 500 Raceway provided many airmen from the base an opportunity to earn money. During non-racing days, GM paid people to test drive their autos at the track. The predetermined speeds were slow and boring, and driving endlessly around the track at 40mph, or whatever did not appeal to me in any way. 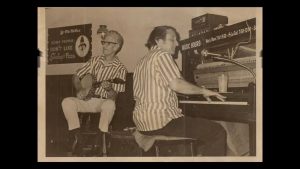 The other opportunity I came across was at the local Shakey’s Pizza Parlor. The regional manager in the area liked to hire GI’s because they were dependable. (And he could always track them down) I had fond memories of the Shakey’s Pizza Parlor in my hometown of Kenosha, Wisconsin where, at eighteen years of age, we sat at picnic tables drinking beer and singing out of tune honkytonk music. It was always a good time.

I applied, was accepted and soon started working as a bartender at the Riverside Shakey’s Pizza parlor. The bar served three different types of soda, and both Coors and Heineken beer in 72-ounce pitchers, or 16-ounce mugs.

I typically worked Friday and Saturday nights, and one or two other days. One bartender took care of things on most days, two bartenders Friday nights and Saturdays, the busiest days of the week. The kitchen usually had five people on the busy nights, one manning the counter and the others cooking pizza, henny penny chicken, or mojos.

I have many good memories of my days at Shakey’s. Friday and Saturday nights, we had a banjo and piano player, and many fun sing-alongs. Customers and employees alike had a good time singing to the music.

Saturday nights were usually open-mic nights. Being Southern California, many people would come in to work on their auditions for the television, film or music industry. We enjoyed many fine performances by aspiring actors and musicians on those days, and customers would really pack in.

One man who specialized in drama, had all of the speeches of John and Bobby Kennedy memorized. Everyone just loved him, and he always saved his performance for last. He recited each speech in perfect dialect, and when he was done there wouldn’t be a dry eye in the house.

When the place closed, we employees would usually sit around the picnic tables drinking free beer till all hours of the morning. One of the men from the airbase who often visited, “Big Mac” (see my earlier blog story of same) was 6 foot 5 inches tall and weighed about 300 pounds. While the rest of us drank out of the 16-ounce mugs, Mac would drink out of one of the 72-ounce pitchers.

The piano players name was “Gill”. Gill was constantly reaching around the bar filling up his beer mug throughout the evening. The manager was always on his butt about it and yelled at us bartenders for letting him do it, but we ignored him. Gill and the banjo player often played music during our after-hours drinking sessions. Other entertainers from the area would stop in and partake in the after-hour party as well. Great times they were. 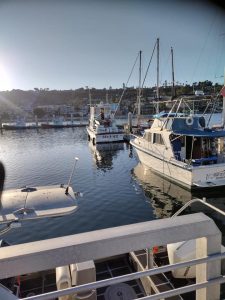 The manager was a great dude and a big softie at heart. He had a large fishing boat moored in San Diego. Once every month or two he had a bunch of us out on his boat. We’d bring all the left-over chicken and pizza from the previous day, along with a barrel of beer. Sometimes we caught fish, sometimes we just partied.

We usually fished off the coast of Mexico. The Federales down there would shake down Americans when they could. We encountered them once, when they tried to stop us, even though we were in international waters. They fired at us with their weapons, but didn’t come close to hitting us. Our manager fired back at them with a 30-30, and they left us alone after that. He said, if anyone resisted, they wouldn’t pursue them. After spending a year in Vietnam, I had had enough of getting shot at; you never get used to it. But we had a good time that day also.

The manager was a kind hearted man, and we often delivered left over food to a local food pantry, which serviced the poor. Sometimes less fortunate folks would come by the restaurant during business hours. We never let them leave without a box of food. 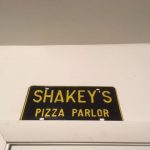 I carry many good memories of my days at Shakey’s. 🙂