My First Week in Vietnam

(The meat has been brought to the tiger)

A Serious Change of Scenery

I served in the United States Air Force from 1968 to 1972. I served in Vietnam from January of 1970 to January of 1971. I was assigned to base supply, however from early on I aspired to transfer to a unit where I could learn a more marketable skill with perhaps more interesting work.

Before serving in Vietnam, I was stationed at Grand Forks Air Force Base in North Dakota. While at Grand Forks I had the opportunity to transfer into the nuclear weapons field. After several months of background checks and aptitude testing, I was approved for the program. However due to circumstances beyond my control, conditions suddenly changed and my status in the program was put on hold. 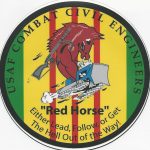 The year being 1969 with the war in Southeast Asia raging, I soon received orders for duty in Vietnam. As soon as I got to my duty station at Phu Cat Airbase in the Central Highlands of Vietnam I was told to report to the Red Horse Squadron on base. The Red Horse squadron is the U.S. Air Force equivalent of the U.S. Navy Seabees. They perform any number of tasks required to get a unit up and running, all over the globe. I was surprised, but happy because I felt I would be transferred into the unit and would learn a good trade, with interesting work. 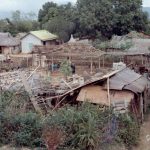 The village was dirt poor 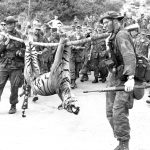 Tigers and leopards posed a real threat to the villagers

Reporting for duty my first day of work, I learned that our unit would be building a water pumping station for the village of Phu Cat. The village had minimal electrical service, but no running water. Village women and children were responsible for toting buckets of water from the river to the village as needed. This was, at times, very dangerous because the area was frequented by leopards, tigers and many poisonous snakes, not to mention Vietcong. (VC) This was one of the base commander’s “do gooder” projects and as such was given a high priority.

Myself and another FNG (new arrival) were tasked with carrying bags of cement from the truck to the bottom of the steep river bank where the pumping station was to be built. It typically took new arrivals in Vietnam about a month to get acclimated to the hot, steamy environment, not to mention the mosquitos, leeches, ticks…and VC.

Eager beavers, we launched ourselves into our work, moving twenty or thirty bags of cement down the hill in the first few hours. However, as the day grew warmer and our unconditioned bodies weakened, the task soon took it’s toll on us. We took to rolling the ninety-pound bags of dry cement down the hill, however some broke open, raising the ire of the grizzled old Master Sergeant who was running the job. 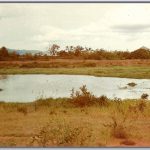 It wasn’t much of a river

And sure enough, around eleven o: clock, my partner first, then I, were both overcome by heat and exertion. He collapsed and rolled down the hill, tumbling like an out of control freight car. My legs gave out beneath me as well, causing me to slide down the embankment feet first. A few of the men in the outfit stopped their work momentarily and set us half in the river and half out so we could cool off and rest. We laid like that for about a half hour, nauseous and groggy. After we recovered, slowly but surely, we resumed our work and managed to get the remaining bags of cement down the hill and ready for mixing. It was a brutal exhausting day for the two of us, but we got through it.

The work detail returned to the base after about fourteen hours, intending to resume work early the next morning. The Master Sergeant praised our efforts and handed out cold Black Label beers to all. Relaxing and joking around, my partner and I felt proud, as we were now made to feel part of the group, sharing C rations and cold crisp beer with our new mates. We slept like rocks that night and again reported for duty at five thirty the next morning, sore as hell but ready to go. 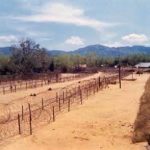 Arriving at the work site, just a mile or so outside the base we were in for a surprise. All of the new construction that we had started the previous day was demolished, the newly poured cement footings smashed, the wooden posts and beams torn down and scattered. The few hand tools that we had left were also either broken or taken from the site.

We just stood there for a time, a bit stunned. Collectively, we realized the local VC had paid us a visit. Our effort, not surprisingly, was not welcome by them. Anything that made the U.S. look good…. also made the rebels look bad. They weren’t going to stand still for it. Now furious, the old Master Sergeant stood glowering. “You men salvage what you can, take an inventory of what we need and start pouring new footings. I’ll go report to the Major.”

As ordered, we took stock of the situation, noting what additional material we would need. We then started pouring new cement footings right over the old damaged ones. The Sarge returned, this time with the Major who wanted to see the damage for himself. With them, they brought several thermos bottles of coffee, cans of soda, candy bars and a truck full of new supplies. The sarge let go with a few expletives, “We’re gonna rebuild it and the hell with them!” Everyone pitched in that day, even the Major. We were furious at the VC and it was reflected in the spirit in which we worked. Villagers came down and helped as well, bringing bottles of rice wine and “33” beer for everyone.

My partner and I were able to get through the day, without any fatigue related issues like we had experienced the first day, taking breaks with the rest of the group only as needed. The whole unit was fired up and worked all day repairing what had been damaged, and then some. When we left the site late in the evening, the Phu Cat village chief agreed to post a guard to prevent a reoccurrence of what had happened the night before. We felt good about our effort and celebrated with cold beers once again. We had a nice steak fry as well, compliments of the Officer’s and NCO club.

A Grim Scene Awaits Us 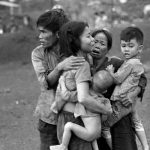 For the Vietnamese, terror was a constant companion

The next morning we left the base with a bit of trepidation, and our arrival at the work site confirmed our worst fears. The VC had again paid us a visit during the night. The guard the village chief had promised was nowhere to be found, and what we did find unsettled us considerably. Instead of just destroying the new work we had accomplished the VC sent us a much stronger signal. As we moved down the embankment, a loud drone filled our ears. We gasped, and stood stunned by what greeted us at the worksite. Instead of destroying and stealing our materials as they had previously done, the small enclosure we had completed was now packed with the bodies of villagers the VC had killed. In the hot steamy environment, immense clouds of flies roiled over the bodies, which had already started to decompose.

It was a horrid scene and many of us wretched at the site. After the initial shock, we mostly stood quiet, with even the grizzled old Master Sergeant standing mute. Upon regaining his composure, the Master Sergeant directed one man to alert the village chief. We left two armed men at the scene and returned to the base. After hearing the report from the Master Sergeant, the Major contacted the base commander who pulled the plug on the operation. He felt the effort was not worth the deaths of anymore villagers.

And Back to Supply Again 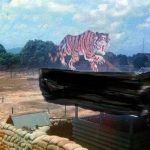 The ROK bunker where I spent most of my last two months in Vietnam.

A week later the Red Horse squadron at Phu Cat was redeployed to Bien Hoa, a base in another part of Vietnam. My partner and I, having acquired no skills were transferred back to our original units and remained at Phu Cat. I spent the rest of my tour assigned to base supply, spending much of my time working in the warehouse on base, moving materials via truck to other military facilities in the area, and humping cargo on aircraft all around the Central Highlands of South Vietnam. I spent the last two months in the ROK (Republic of Korea) bunker just outside the western perimeter of the base. 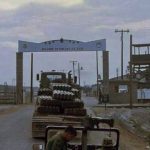 The main gate at Phu Cat became the home of the village well.

A few months after our attempt to build the water pump failed, a well was drilled near the main gate of the Phu Cat airbase. (Reference my earlier blog “A Well for Phu Cat”) The well was within easy walking distance of the village and being near the main gate was protected twenty-four hours a day. Thus, the water problem for the village of Phu Cat was finally solved. 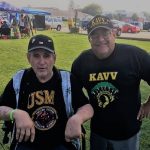 My good friend John, USMC and myself, USAF. Two old Nam vets, still good friends after all these years.

Copyright protected, all rights reserved © Joe Campolo Jr, You are welcome to share Joe’s blogs in their entirety crediting him as the creator