The character Nguyen Than Hoa 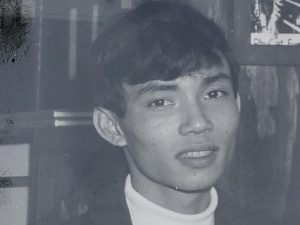 My good friend Larry who I served in Vietnam with, found this picture of Hoa. ………..RIP Hoa.

Many people have asked about the characters of my books, The Kansas NCO and Back To The World, particularly during speaking engagements. All of the characters in the books are based upon real people, and exhibit characteristics from those people. Some are based more on fiction than on fact, others more on fact than fiction.

Hoa, as we called him, was a Vietnamese teenager from the village of Phu Cat who was one of the many workers the U.S. military hired as part of the Vietnamese aide program. We worked with Hoa for many months and found him to be an intelligent, engaging young man. He was only 3 or 4 years younger than us, and we treated him like our little brother. He asked us about our lives back in the states, and of course, we had many questions about his life in war torn Vietnam. He had little good to say about the local South Vietnamese military forces, as they apparently treated the villagers almost as badly as the Vietcong at times; and sometimes worse.

One day Hoa did not show up at his duty station, and one day led to the next with no sign of Hoa. We attempted to find out what happened to him but didn’t get much feedback. Finally we discovered that Hoa had been killed in a battle between local VC and ARVN (South Vietnamese) soldiers, right on our south perimeter. Hoa was branded as a VC and as such received little fanfare from anyone of authority in the military aide program.

We were deeply saddened by the news and missed Hoa very much. It was our belief that whatever Hoa may have done, he felt compelled to do. Hoa’s strongest desire was to emigrate to the United States. And even though Hoa did not live to fulfill his dream in life, I gave him that honor in my book.

Note: Aug. 2019, at a recent reunion with my friend Larry Montrie, who I served in Vietnam with, he gave me the above photo of Hoa, which he found while going through all of his old letters from the days of his service.

Linkedin
◀ Letter from a reader
The Orphans ▶