The Emperor of the North Pole 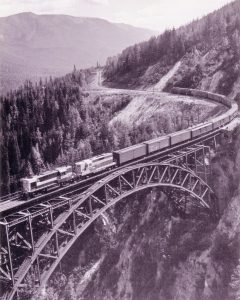 Show me an alley, show me a train. Show me a hobo who sleeps out in the rain. And I’ll show you a young man with many reasons why, there but for fortune, go you or I.

I had quite a few jobs when I was a kid, delivering newspapers, washing windows, all the usual stuff. However one job I had when I was around fifteen stands out.

In my hometown of Kenosha, Wisconsin the Becker brothers had three small sundry stores scattered around town. Very small by today’s standards they were called “Becker’s Cigar Store” and they offered, beer, magazines, watches, some five and dime type items, and of course, tobacco products of all kinds.

My dad knew the Becker boys from way back and managed to get me a job at the store located by the train station near downtown. (not the best neighborhood in town)

For $1.10/hour I waited on trade, washed the floors, stocked shelves and closed up at night. It was a one man operation, so the shift could be long and boring. And even though I was only fifteen, I sold beer and was expected to check ID’s and enforce the law regarding underage purchases . Of course, many of my friends and acquaintances made a bee line to the place in an attempt to procure beer. And yes, I have to admit at times I was persuaded to sell it to them. (times were different back then)

One very entertaining aspect of the job for me, was watching the tramps jumping on and off the trains coming in and out. Some, off the inbound trains, would wander over to the store and panhandle. I usually gave them a free coffee and bag of potato chips. They’d soon turn the coffee into a milkshake, loading it up with cream and sugar. 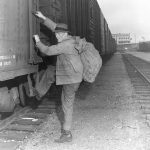 One particularly charismatic tramp would tell stories which I, along with the other tramps and anyone else in the store would listen to. He spun all kinds of exciting tales involving railroad detectives, bad weather, and fortunes won and lost. He claimed he was a personal friend of the “Emperor of the North Pole” who he supposedly was befriended by in his “early” years riding the rails. He was quite entertaining.

Unfortunately my job at Beckers was to come to a sudden end one day. I was alone in the store, as usual, when two large men came in. One produced a very large switchblade and told me to “just be cool”. They came around the counter and filled two large bags with watches, and other products from the display case. Strangely they didn’t ask me to open the cash register, and I never really felt threatened by them. When their sacks were full, they just smiled and left. The next day, when my mother found out, she insisted I quit the job.

But I often think about those days watching the trains coming in and out, wondering about where they were coming and going…and I also think about the wily cast of characters who went in and out with them.