I recently connected with an old high school classmate, Norm Kober. Norm is a fellow USAF Vietnam War Veteran who has led a very interesting life. Here is Norm’s story in his own words: 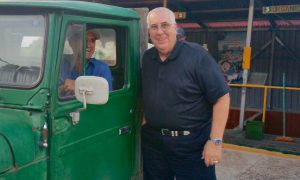 Norm Kober January 2016 in Costa Rica with Franco Garbanzo a Thrive Coffee Farmer at the micro mill that Franco and 13 other farmers have developed to process there own coffee crops.

I have been a Chick-fil-A restaurant Operator for 37 years in Texas. The reason for my return trips to Vietnam are linked to my career. Chick-fil-A was founded by S. Truett Cathy , Truett’s life was dedicated to impacting lives, and he shared his passion and commitment for this work with everyone in the Chick-fil-A family. This passion has led us all over the world teaching leadership development , and sharing a model we call SERVE . The acronym stands for See and shape the future, Engage and develop others, Reinvent  continuously, Value results and relationships, & Embody the values.  As an example of the serve model that we use is Christianity. Amazingly this can and has been used as an effective teaching tool all over the world in places that restrict all freedoms including freedom of religion.

I personally have been blessed to be  able to have presented in Siberia, Vietnam, Costa Rica ,  Guatemala, Haiti, Jamaica, Columbia, Currently most of my recent work has been in Costa Rica , where we are working with Thrive Farmers, the thrive farmers are group that has reinvented the way coffee is brought to market, their method is designed to cut out all the middle men steps in the process of getting the crop they grow , usually as a family business, to market and allowing the farmers and their families to receive a much better profit from their crop.

But now back to Vietnam, when we make these trips we always have a partner in country that has some business there that gives us some access to developing leaders, sometimes in that business or possibly in government or mission work, or at universities.

It’s amazing that the countries that are the most repressed have the largest appetite for hearing and learning about how things are done in a democratic republic, and sometimes they question us as to whether we have studied our own history and the history that has put them in their conditions of Communism or Socialism, pretty good question at this time!  Vietnam is amazing, the country’s population is about 75% under the age of 35 so the part of there history that involved the US and our troops is just History to most young people. About the same as when we were kids in the 50s and 60s our fathers war WW2 was a part of our games and TV. It only takes one generation to move past a war for the young, even if there fathers never can forget or adjust after their personal involvement .

So the surprising part of being back in Vietnam was, the only person that was agonizing about the past was me, at least with the people We came in contact with. The young people want to absorb everything they can about the U.S. And how we live, they are trying to make there personal lives better by educating themselves and looking at the world through a prism that will reveal as many facets as possible . The Vietnamese young people are just as determined to succeed as their ancestors were. When traveling around the country both north and south as we did, we never felt like we were not welcome.

The Vietnamese people understand that foreign investment and tourism can, will, and has already, made there country better place to live in then it had ever been in the past. I spent time in Hanoi, Saigon, Hai Phong, and many other small towns , I crawled through the tunnels and visited the war museums visited the Hanoi Hilton ( now a war museum, and tourist attraction) and visited world heritage sites, and would recommend to anyone to visit Vietnam. Visiting was a lesson in politics, history and  the human condition and our ability to survive and thrive if we have the will.

The Vietnam war was a waste for everyone, all three side lost in more ways then we can count. The North did achieve victory in the war, but they never captured the hearts of the people of the south. The people all over Vietnam both north and south want the same things Americans want, that’s freedom to make a life for our families and ourselves that is improving and satisfying, where we can worship  without fear, and with hope that our children and grandchildren will be able to do the same.

My Life was changed forever because of Vietnam, the first two times I was there as an airman in the service of my country, I fixed airplanes , loaded wounded and dead soldiers on transport plane to leave the country, I grew up in many ways, some I don’t talk about because of shame, and some I can say I’m proud of. The last two times I visited Vietnam I went in service to mankind to help make someone’s life better. I grew more on the last two trips then the first two. I learned that you can’t win a war with a gun, you can win battles for territory with weapons but you won’t win the love, honor, and respect of people if your shooting at their countrymen.

I hope this helped give you an idea of who I have become and who I would like to be. You probably don’t remember me at all from our school days, and that’s probably a good thing. I was not a very good student and did not represent myself very well in those times. I have been blessed to have lived long enough to learn something’s about life that I didn’t learn in school.  I hope this finds you in good health and blessed. I ordered both your books this AM from Amazon and very much look forward to reading them. I would hope that at some point in the future I might be able to get you to sign them for me. It’s good to have hope and things to look forward to.

Linkedin
◀ Tommy and the Turtle
More Philosophy, Quotes from Others ▶