With Christmas tips in my pocket, I felt like Rockefeller. 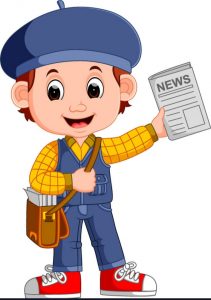 Growing up in Kenosha, Wisconsin back in the fifties and sixties, many of us boys (and a few girls) had a paper route by the time we were eleven or twelve years old. Our allowances pretty much expired by that age, and our fathers let us know it was time to start earning our own spending money. (And they weren’t too subtle about it either)

The premier paper route job in Kenosha was that of a Kenosha News carrier. The Kenosha News routes were thought to be gravy jobs, because most of the people in Kenosha got that paper and as a result, the route sizes were small, but concentrated. You could walk those routes easily in an hour or so. If you had a Kenosha News route, you were high on the pecking order as a kid. 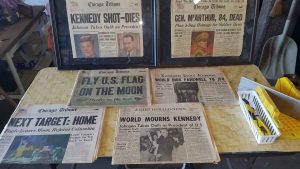 The other type of paper route to be had in Kenosha was a Henoch News agency route. These routes delivered the Chicago Tribune, Chicago Sun Times, Chicago American, Milwaukee Journal and Milwaukee Sentinel. Customers for those papers were much fewer and farther between, so the routes were large and spread out. Each of these papers was larger than the Kenosha News and required folding the various sections together before delivery. Because of the large spread and size of the routes, it typically took at least two hours to complete the route, sometimes three. The highly valued Kenosha News routes were handed down from family member to family member, so we ended up with a Henoch route.

My brother John and I started out with a Sunday route, and kept that going for a couple of years. Later, we got a daily route which paid more. When we first started out, we had to collect the money from the customers, and that would take another two to three hours each week. Henoch News eventually came up with a collection system that eliminated the need for the carrier to collect from the customer. That saved time, but also cut us out on many of the weekly tips we may have gotten. (At Christmas time, using cheap calendars as bait, we lobbied for tips) 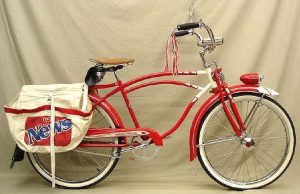 Spring, summer and fall weren’t too bad as far as delivering papers in Kenosha. But winter…winter added a whole new set of problems to the task. My brother and I both had bicycles with side baskets which would hold many papers. Two or three trips to refill and we’d be done. In the winter, when the weather was bad, we had three choices; talk “Dad” into driving us, walk the route with newspaper bags, or use the sled with a special box for carrying loads. You can guess how much luck we had convincing Dad to take us. Walking our routes with the bag or the sled added at least two hours to our delivery time, but you do what you have to do. In the spring, summer and fall, rainy days presented problems as well. The newspapers were dropped off in bulk in front of our house in the early morning. If it was raining, we’d end up with a bundle of soggy newspapers. 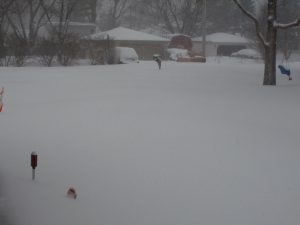 Bad weather wasn’t the only problem we encountered during our paper route days. In the days when we still had to collect from the customers, there were always customers who we had to call on several times before we could collect the money owed. Occasionally the news agency would tire of their stalling and cancel their subscription.

Newspaper carriers and mail carriers both had to deal with a common enemy on occasion…dogs. Loose dogs would sometimes threaten us and even chase us off our routes. We got pretty adept at whacking them with a rolled-up newspaper while pedaling away as fast as we could. 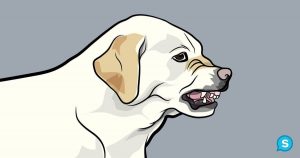 One dog of note, harassed me on my route for a couple of months one year. I complained to the owners and the news agency but nothing helped. My mother didn’t like dogs, so we never had one. But now and then I’d bring home a stray and she’d let me keep it for a short while.

One of the strays I adopted solved the problem of the constant harassment I had been getting from the dog on my route. This particular stray was a large Boxer. I started taking it on my route, with the leash attached to the handle bars on my bicycle. Sure enough, one day the dog that had been harassing me came tearing out after us. I let the boxer off the leash and he taught that dog a well-deserved lesson. I had to give up the boxer after a couple of weeks, but was never harassed by the other dog again!

Despite a few inconveniences’ and problems on our various paper routes, I mostly enjoyed them and picked up enough money to carry me along for three or four years.