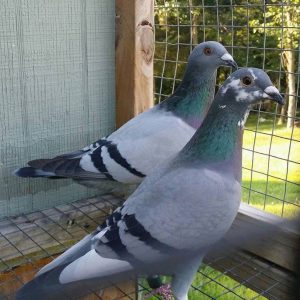 One of the fads in our old neighborhood back in the day, was raising pigeons. At least seven kids on our block in Kenosha, Wisconsin raised homing pigeons, some for several years.

I got into the craze early, purchasing a small pigeon coop and two Tumbler pigeons. Tumblers were pigeons that would fly up into the sky, then tumble end over end towards the ground. They would repeat this performance non-stop until they tired and returned to the coop. There are many varieties of Tumbler pigeons, and they all exhibit the strange tumbling behavior. I always figured it was some sort of mating ritual. (But I never tried it myself)

After two weeks of homing, (holding them in their coop to imprint them) my Tumblers were released from their coop. And they did come back, much to my relief. After that, they were let out every day to fly as long as they wanted. The coop was attached to the inside of our garage, by a window for coming and going. At the time, I was going to Sunnyside (now Grewenow) School and my classroom was on the 2nd floor, facing the block we lived on. I would race home at lunch time and release the Tumblers; when I returned to class after lunch all the kids in class, and sometimes even the teacher would watch the magical birds that would fall out of the sky and soar back up. It was cool! 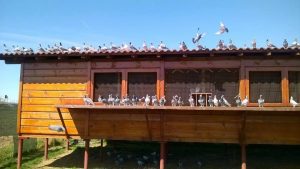 Some of the coops were huge!

After my brother got involved, our dad built a large pigeon coop, replacing the smaller one I had. We then enlarged our flock, to include several different types of pigeons; Blue Bars, White Doves, and Fantail pigeons.

The other kids in the neighborhood had large coops built as well, and there was a real competition going. Kids being kids, sometimes we played dirty tricks on each other’s pigeon coops. But for the most part we all cooperated and shared information about the birds, trading them on occasion and helping each other out.

Back in those days Kenosha had a “pigeon guru” by the name of Werwie. Werwie lived on the north side of Kenosha and raised and sold pigeons, along with pigeon feed and other related products. He also dispensed information to rookies and veterans alike. Any serious discussion in Kenosha regarding pigeons, referenced Werwie at least two or three times during the conversation. Visiting him was like a trip to Mecca for all the pigeon fanciers. 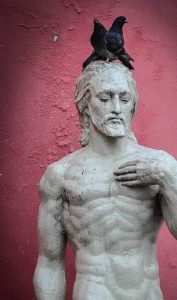 No one is safe from them!

The different types of pigeons in your coop determined your rank in the local “pigeon hierarchy”. Blue Bars were the most common type of pigeon. They are the ones you typically see fouling up statues around parks, nesting under railroad bridges and begging for food everywhere. They are commonly known as “Rock Doves”. The Tumblers I had were rare, and so for a time, my rank in the local pigeon hierarchy was elevated.

Fantail pigeons were kind of a “fancy Dan” bird, not very active but showy. My brother and I had some for a time, but soon tired of their dull behavior. Dragoon pigeons were odd looking and not very common or sought after. King pigeons were large and chicken like in their habits. One kid in our neighborhood kept them, and his family added them to the menu. Tasty and large, they also made a large mess! Some of the pigeons we had over time, remained unknown regarding their proper identity.

Racing pigeons was very exciting. Pigeons would be banded and taken to a far-off location. The ones that returned the fastest were the winners. Waiting for them to return was an anxious time, sometimes they were preyed upon by hawks, and other times killed by storms.

As kids, our finances were usually stretched to the limit. Nobody in our blue class neighborhood received much of an allowance, if any at all. We mostly made money through paper routes, cutting grass and shoveling snow. Pigeons were not cheap, so we usually traded them for other pigeons or relied on natural reproduction to increase our flock. (Pigeons are very prolific) 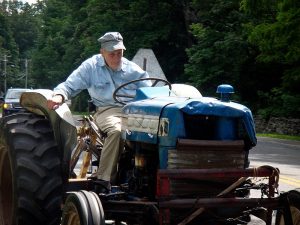 Raiding their corn, raised their hackles!

There were times, however, when we ran out of feed and had to improvise. Desperate, we occasionally raided nearby corn fields, earning us the wrath of the farmer, and our fathers when caught.

Our next door neighbor had an addition on his house with a flat roof. He put a decorative railing around the edge of it. Naturally, our pigeons favorite roosting spot was on that railing, constantly fouling up his roof. He complained about them all the time, and was pretty damn happy when eventually, we got rid of all of our birds.

Despite our various mishaps and shenanigans, we enjoyed our pigeon raising adventures quite a bit. And I can still see those Tumblers, soaring high into the sky, then tumbling back, over and over, stopping just short of the ground.