Tommy and the Turtle 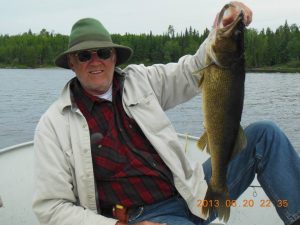 Tommy with a nice walleye he caught on our Canadian fishing trip not too long ago.

If I fished only to catch fish, my fishing trips would have ended long ago. – Zane Grey

My friend Tommy and I have had many great fishing adventures over the years. We’ve ice fished, river fished, pond fished, fished in the big water of Lake Michigan and the far northern reaches of Canada. Tom, originally from Denmark, was a Merchant Marine, then a plumber and is an overall very good natured dude. Among his many talents, Tom makes great homemade wine, which he refers to as “lunker juice”.

Several years ago, Tommy and I were fishing near a dam along the banks of the Fox River in Central Wisconsin, where I have a nearby mobile home. Tommy was fishing right up by the dam itself, casting for walleyes. I was downstream a bit and one other fisherman was in between us.

I was catching a few catfish here and there, and wasn’t aware of how Tommy was doing. However after a short time, I noticed him bringing in a nice fish, although I didn’t know what it was. Soon Tommy yelled for me to come and check out the nice walleye he had caught.

Since I had previously lost two poles in that body of water to wily catfish dragging in my unattended rig, I pulled both rods out of the water and went to check out Tom’s catch.

Tom had put the fish on a stringer and left it in the river to stay fresh, however when he tried to bring the stringer in he encountered unexpected resistance. “What the h..” Tom said, needing both hands to pull the stringer up out of the water.

Sure enough, now out of the water at the end of the stringer was his nice walleye……with a very large snapping turtle hanging on to its tail! 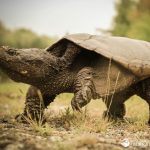 Normally very easy going, Tom’s a hoot when he’s stirred up! Now glaring at the fish snatching snapper he starts yelling and cussing and shaking the stringer in attempt to dislodge the interloper. “Sonofgun let go of my walleye you damn snapper!” These and other fine words were showered upon the unwelcome beast.

Finally after a time, the snapper released the fish, dropped to the ground; and went after Tommy’s foot like a pit bull after a ham bone. “Cod darn you, you sonofb….” …along with another string of testy language poured out of Tommy’s mouth as he danced and dodged on the steep little bank in an effort to evade the bite of the hard shelled terrorist.

By now, the other fisherman and I were laughing so hard we could barely stand, so we weren’t much help at all.

After a struggle, Tommy managed to get his foot under the snapper’s shell and kick him back into the river. Shaking his fist, finally victorious, Tommy proceeded to assess the damage the turtle inflicted on his prize catch.

The other fisherman, still laughing, now commented, “Where’s a dang video camera when you need one?”

Tom filleted his nice walleye and took it home. And during those times while enjoying “lunker juice” and telling stories, Tom takes the ribbing about his run-in with the turtle terrorist in good humor.