The play’s the thing. 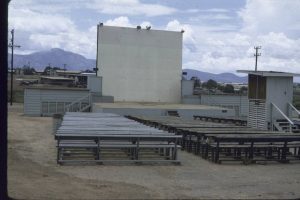 One of the nicer amenities provided by the U.S. military for American GI’s in Vietnam was the opportunity to view feature films. (The word feature being highly subjective) Most medium and large U.S. military facilities had a movie theatre of one type or another. The real large bases in Danang and Saigon actually had indoor theaters, complete with air conditioning and concession stands. When I was in Danang for a short time I was able to catch an indoor movie while munching buttery popcorn in a reclining seat; at a nice cool 72 degrees. (Heaven on earth) I was never in Saigon, but I understand the theater at the air and army base there was every good as any large cinema back in the states.

The Phu Cat Airbase, though not as large as many other facilities in Vietnam, boasted a movie theater; albeit out door and somewhat Spartan. The small theater and stage was put up in 1968 specifically to host a USO show by Bob Hope and company. Standing on the edge of the base, the screen faced the western perimeter. While this solved a light pollution problem, it did provide somewhat of a security problem, as the men watching the late night entertainment now sat with their backs facing a very active (and dangerous) Vietnamese countryside. As a result of this security risk, all attendees were required to wear flak vests and helmets as they sat through the feature; keeping in mind that it was normally around ninety eight degrees Fahrenheit with the humidity being close to one hundred percent. And of course during the monsoon season the viewing audiences would be subjected to torrential rains. (But the show must go on) 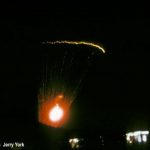 Being on the edge of the western perimeter provided a host of problems for the Phu Cat stage and theater.

The security problem manifested itself often, as a close inspection of the large screen revealed a surface pockmarked by bullet holes, both large and small caliber. The bullet and shrapnel holes, though patched up on a regular basis, were soon replaced by new ones. Rumor had it that one particular Vietcong sniper, who preferred westerns, would take pot shots at movies he didn’t care for. I personally viewed several films at the theater and had to run for cover on two of those occasions; one of which was a short mortar attack not directed at the theater specifically, but a threat nonetheless. The other involved a VC (or other disgruntled film fan) sniper who shot at the movie screen during the film. Having been shot at before, I recognized the popping of air past my ears well before I heard the report of the weapon; and along with the others present I scrambled for cover under the aluminum bench seats. Fortunately no one was hit that night.

It was no surprise to us that the VC or anyone else would take exception to the films, both from a quality or content stand point. Most of our supplies at Phu Cat came from the army facility at Qui Nhon, a coastal town about thirty miles away. From Qui Nhon our supplies and materials stopped at one or two other compounds in route before reaching Phu Cat. By the time the films arrived at Phu Cat they were often in country for several months; the heat and humidity not to mention wear and tear from repeated use wore them down considerably.

Our films usually broke several times during the performance much to the chagrin of the film projector who was known to one and all as “Lester”. (What else) Outside of the local VC, who often ruined our sleep with their shenanigans, our film projector “Lester” was the most despised man at Phu Cat. We often had the same movie for weeks, and only out of insane boredom could I drag myself to go see some of them. The movies were mostly old westerns from the thirties, forties and fifties, and if any of them got close to seeing an academy award it would have been only through geography perhaps.  How many people remember “Johnny Mac Brown”? Yep….not exactly top flite entertainment.

When the film broke, as aforementioned, the viewing crowd went after Lester like an angry lynch mob. They showered him with obscenities, and threw debris at his little projection booth in the middle of the viewing stands. On several occasions he was dragged out of the booth and beaten, prompting the Apes (Air Police) to be summoned to quell the disturbance. I felt sorry for the guy; kind of like one does for Barney Fife on the Andy Griffith show. You gleefully know a disaster will occur that Barney is responsible for, yet you’re glad when Andy takes pity and bails him out. Unfortunately Andy wasn’t anywhere near Phu Cat and old Lester took more abuse than a telemarketer at supper time. I often wondered how poor old Lester got stuck with that duty. Between VC snipers and the surly audience, Marines at Khe Sanh took less abuse that Lester. 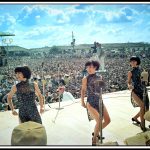 The newly installed electrical grid on base provided plenty of power for the theatre and any accessories required. A stage was built in front of the screen and in addition to the Bob Hope show in ’68, many other USO shows were held there as well. The USO contracted with many Asian entertainment groups to perform for American GI’s in Vietnam. Korean, Filipino and Thai bands performed often and “Plowed Maly” along with many other pop favorites would be belted out, albeit with a unique Asian dialect.

After an internal investigation by the U.S. military during that time, it was revealed that a group of senior NCO’s responsible for the USO shows in Vietnam were skimming off the top. (Reference my book The Kansas NCO) This was no surprise to anyone, as the same performers visited Phu Cat over and over again…..no matter how bad they were.

The quality of the musical performances by these bands was often determined by the amount of alcohol the audience had consumed; (despite having been barred from these shows) however the bands knew what the American GI’s really came for…..and they gave it to them. Each band contained several young girls who, scantily clad, would gyrate to the music in the steaming Vietnamese heat. The young, robust GI’s, months away from home, would yell, scream and dance along with the nubile young women, while pressing as close to the stage as they could. Security police kept a close watch on these performances as GI’s would often encroach upon the stage while attempting to grope the dancers. Performances were stopped on many occasions as hordes of lustful men would breach the stage all at one time. When this happened the entertainers would flee in terror as the beleaguered and badly outnumbered security police would futilely attempt to stop the surge of alcohol fueled, hormonal crazed GI’s. 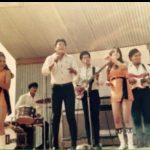 The USO knew what the GI’s wanted

Despite the questionable quality and condition of the films and USO bands you couldn’t keep GI’s away from these shows with a gun. (Which was often tried, as previously noted) Entertainment was at a premium and any chance to get away from the glum reality of the war was taken. Troops who came in out of the field took advantage of the theater as much as they could; some just came to grab a place to sleep. If they caught any part of the show, so be it, but they enjoyed their short respite from life in the bush. Local villagers would often sit outside the wire and watch the entertainment as well. Come darkness, however, they would melt away into the night; as the territory was now occupied by Vietcong and trigger happy American perimeter guards.

And despite any problems regarding the movies and USO shows, any GI who served in Vietnam has fond memories of those movies and shows, and probably photos as well. Bob Hope, Ann Margaret, Chris Noel, James Brown, Sammy Davis Jr, Martha Raye, Raquel Welch and many other performers took time out of their lives and schedules to visit and entertain us in Vietnam. It wasn’t easy for them either; they had to deal with the heat, the monsoons, the bugs and the VC just as we did. And thanks also to the many Asian performers who provided us with entertainment …of all kinds.

But we can still look back and chuckle at the various adventures and misadventures surrounding our outdoor theater at Phu Cat……….And Lester…..if you’re still out there somewhere…..thanks for taking all that abuse and showing us those great films back in the day!