The Critters of Vietnam (Published in MWSA Dispatches; Fall 2017)

Upon being surprised by a predator in the wild, your memory is seared for life.

Anyone who knows a Vietnam War veteran has probably heard many stories about the wildlife they encountered during their tour of duty. My friend and fellow author, Vietnam Veteran John Podlaski recently added a story to his website about the critters of the Nam. This is my recollection on the subject. 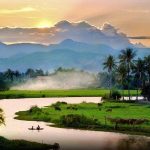 Vietnam, a beautiful country that even at war, teemed with wildlife.

Vietnam is a tropical country on the edge of a large continent, bordered by an ocean. It has a diverse topography along with many flowing rivers and streams. And there are critters…..many critters.

One thing that constantly amazed me during my tour of duty in Vietnam was the number of critters that were able to survive in that deadly war torn environment. Back home; you crack a twig and every deer within earshot takes off like a rocket. Somehow the wildlife in Vietnam managed to survive, and in some cases thrive; while tens of thousands of firefights, bombing sorties, naval bombardments, artillery missions and chemical defoliations took place. How did they manage?

The place was noisy, very noisy…..and dangerous; nonstop. Yet tigers, leopards, vast troops of monkeys, elephants, too many snakes to mention and even rhinoceroses survived in that toxic environment. It wasn’t surprising that the insects survived….they’re designed to survive under any condition. And hordes of insects occupied Vietnam. Immense rice beetles, mounds of stinging ants, scorpions, spiders of every make and model….and of course the mosquitos that tortured every GI who ever set foot in- country.

Those mosquitos, ever present day or night, rain or shine; would swoop down in hordes getting into your mouth, nose, eyes, and ears. The military doled out mosquito repellant that could strip paint, but it barely slowed them down. After a month or two you just took them in stride. Of course the grunts in the bush all day had it the worst; but the mosquitos spared no one because of rank or station.

My experiences with the “critters of the Nam” are similar to others who served during the war. Although to this day I am not overly pestered by mosquitos, they certainly cramped my style in Vietnam. Sleeping was the worst; some guys obtained mosquito netting to put around their bunks. I found the netting to be very bothersome. (Besides, someone stole mine) 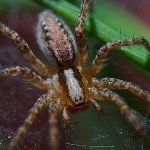 The area was infested with these

All the hooches, barracks and buildings on the Phu Cat airbase were occupied by hordes of large hairy spiders. They looked like a small tarantula and were everywhere. I waged war on them constantly, dispersing the deadly Military grade insect repellent like Agent Orange. It didn’t put much of a dent in their population; but I wasn’t going to let them roll me over.

Rats were another problem. HUGE rats. They also occupied most buildings and structures everywhere. One ran over my chest one night when I was laying in my bunk. No sleep that night. Always short of protein, the ever practical Vietnamese put them on the menu. (Another reason I never dined with them)

Many American GI’s made pets out of the local monkeys. They looked cute, but most of them were meaner than a mother-in-law without a grandchild. They would savagely bite anything other than themselves and I avoided them like the plague; which, by the way, was also present in that unfortunate country. 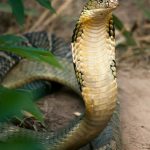 Cobras preyed on the huge rats that ran amok.

Snakes were ever present in Vietnam. Cobras were frequently found on base and shot on sight. In one incident I witnessed a hapless perimeter guard trying to shoot a cobra that was approaching him aggressively. He kept trying to shoot the snakes head, but the snake, dodging like Muhammed Ali, kept right on coming. Finally a well-seasoned guard casually approached the snake and lopped off it’s head with a small machete.

Our hooch dog “Noah”, a feral dog we had adopted, became an overnight hero because of a cobra. He had supposedly killed one that had entered the barracks one night, and was heaped with lavish praise. It has always been my opinion that Noah found a dead cobra and dragged it into the barracks to eat; but I wasn’t going to rain on his parade. Good for Noah. 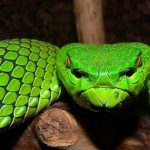 The “two stepper” terminated many Vietnamese

Another snake of note was the Southeast Asian pit viper. A small snake of various colors it was referred to as a “two-stepper” because supposedly once it bit someone they took two steps and dropped dead. This snake was more of a problem for the Vietnamese who wore only sandals or nothing at all on their feet. American GI’s with their heavily canvased jungle boots were protected from any bites to their feet or ankles. 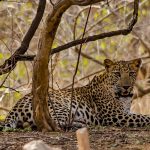 Leopards occasionally preyed on the villagers

The Phu Cat airbase had a large “open” area which was occupied by many creatures; some four legged, some two. A leopard from the area appeared one day and got itself backed into a storage bay at an outside warehousing area. People tried to drive it away but it just sat their snarling and screaming. I was able to see it, and the ferociousness of it certainly made an impression on me. Unfortunately it had to be shot, after which many GI’s posed for pictures with it.

Another animal I saw, right on the Phu Cat airbase, made a lifelong impression on me. Three of us were walking down a small road, heading back to our hooch one evening around dusk.  A jeep came along and we made way so it could pass. Soon we saw the jeep stop for a few minutes. Then it backed up all the way to us. The jeep driver told us to get in. We thanked him but said we’d rather walk. Since he was very insistent we got in and he drove to the spot where he had stopped a minute before. 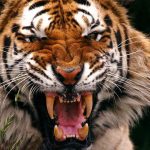 Though beautiful to see, tigers were a threat to Vietnamese and Americans alike

There, hunkered down in some thick brush sat a tiger. With a low growling it sat glaring at us. We watched it for several minutes. The driver wanted to drive it off so it wouldn’t ambush anyone. (There were at least eight confirmed cases of American GI fatalities during the war as a result of tiger attacks)

The driver leaned on the horn of the jeep, after which the tiger let out a blood curdling roar and then quietly backed off and slipped into the night. We reported the incident to the Apes (air police) who casually brushed it off. They said there were a couple of tigers that travelled on and off of the base all the time, and if they shot it another would just take it’s place. I was glad that no one came to harm that night, us or the tiger; it was a beautiful animal. 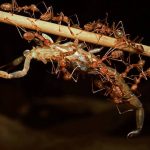 Nothing was safe from them

The critter incident I had in Vietnam which created the most grief for me personally, involved ants. The ants in Vietnam swarmed like bees, and bit like mules. They were worse than the mosquitos. At Christmas time my Mother sent me a goody package. In it was a small tinned ham. My two buddies and I quickly devoured half of it, after which I left for about fifteen minutes to attend to something. When I returned, the ham was a living mound of ants, about twice the size of the ham itself. I cussed and roared and dispersed the ants with fire, but alas…the ham was ruined. I groused about that for at least a week, and harbor it to this day!

Send me a note about your critter experience, in Nam or out!