Staring into the abyss, holds little trepidation for those who live there.

I served in Vietnam from January of 1970 to January of 1971. My service was during the latter stages of the U.S. involvement in the war and it would be inaccurate to say that things were going well. 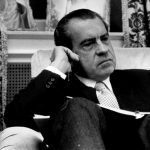 For various reasons the U.S. public had soured on the war and President Richard Nixon’s program of Vietnamization was in full swing. The U.S. was handing the war over to the South Vietnamese…..be they ready or not.

The outlook of the whole U.S. military was very negative during this time and particularly in Vietnam where drug use, fragging and a lack of military discipline became increasingly problematic. I well remember my time there and particularly the fact that the attitude regarding the war and the direction it had taken cast a pall over everyone and everything.

Officially, we were fighting the Vietcong as well as the North Vietnamese Army; but we were also fighting each other. During those trying days, conflict surfaced between the U.S. military and our ally, the Army of the Republic of Vietnam (ARVN); and alarmingly within the U.S. military itself. Black vs white, enlisted vs officer, lifer vs first termer, druggie Vs boozer, Yankee vs country; there were any number of internal conflicts tearing at the U.S. military in all parts of Vietnam during this time.

In those moments while fighting off VC or NVA, the troops united and most of the enlisted and officer corps were at their finest; however it can be safely said that the U.S. military was at one of its lowest points in history during the latter years of the Vietnam War, and for some years after as well. 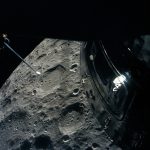 During one short period of time in 1970, however, this was not the case. The crisis that developed during the Apollo 13 moon mission brought unity and pride to the American military in Vietnam; if only for a short time. Apollo 13 was to be the third moon landing for the United States of America, and on April 11, 1970 astronauts James Lovell, John Swigert, and Fred Haise departed earth’s atmosphere on their way to the moon.

The mission proceeded according to plan and schedule until April 13, when during a routine procedure, an oxygen tank exploded. As the results of this malfunction progressed, the small capsule containing the three men slowly lost much of its life support capability. The crisis quickly became worldwide news, and our one and only radio station in Vietnam, Armed Forces Saigon, switched its focus to the crisis, monitoring it non-stop as did much of the world at the time.

Most firebases, airbases, and other large facilities in Vietnam had access to the Armed Forces radio broadcasts. Suddenly every GI in Vietnam had a cause they could rally behind; three of their own were in danger and their lives hung in the balance. We followed the developing events night and day, hoping and praying for the best for our imperiled astronauts. Many of the Vietnamese who worked with us also got behind the movement.

For four days we were focused on the imperiled mission; on duty or off we were fixated by the events. On one of the days of the crisis we had to go out on the road, taking some material to an army salvage yard near Phu Tai. As at Phu Cat, all the soldiers at Phu Tai were zeroed in on the mission as were many of the 173rd Airborne soldiers we saw humping along the road. Many of the Airborne soldiers listened to small portable radios as they plodded along those dangerous roads. We even heard the broadcast in some of the larger villages that we drove through. 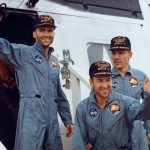 On April 17th the capsule made ready to enter the earth’s atmosphere. And although we didn’t get the blow by blow account from NASA the radio kept us apprised of the status. There was a significant time gap between our update from when the three men had entered earth’s atmosphere to the appearance of their capsule in the sky over the South Pacific. 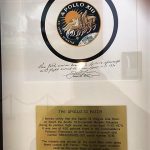 I distinctly remember that day; we were in a warehouse on the Phu Cat airbase when the small craft landed. We held our breaths seemingly endlessly until Radio Saigon declared that the capsule had been opened and the men were alive and though not in prime health as a result of their ordeal, they would be OK. We roared and cheered and screamed and shouted. Gunfire went off all over bases, outposts and up and down roads all over Vietnam. Men hugged, stomped their feet and clapped their hands; some cried.

It was a rare day of victory for the men and women mired in a war that held little promise; but a victory it was. The three stalwart men who represented the best of our nation, by looking death in the eye and beating it; brought a moment of pride and patriotism to thousands of their countrymen, who were adrift on their own mission of peril, some ten thousand miles from home.