Le Ly Hayslip and I became acquainted through our mutual writing activities on the Vietnam War. Le Ly, a Vietnamese refugee from the Vietnam War, has written two books about her experiences of those years. Her book When Heaven and Earth Changed Places is an excellent accounting of her experience and has been a best seller for years. The book inspired the 1993 Oliver Stone film Heaven and Earth.

Le has shared her USA Today review of another book which she highly recommends, On The Ho Chi Minh Trail, by Sherry Buchanan.

Review of On The Ho Chi Minh Trail, by Sherry Buchanan 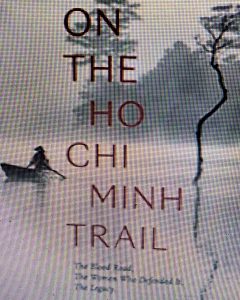 Never in my life have I finished a book in just a few days as I did “On the Ho Chi Minh Trail: The Blood Road, the Women Who Defended It, the Legacy.” More than four decades after the fall of Saigon on April 30, 1975, Sherry Buchanan journeyed down the trail to meet actors and participants from all sides of the war, especially the women who built and defended it.

By following in the footsteps of these young women, she has given them a voice and a face not too many people know about. She also brings to the fore the strategic role they played in the conflict.

Vietnam would not have achieved reunification, peace and prosperity without hundreds of thousands of young women risking their lives to help their countrymen traveling down the trail by foot or by truck to reach the southern battle fronts.

I was interested to learn about the experiences of the young women who like me built roads and bridges and dug trenches, tunnels and bunkers in deep jungles with their hands and hard labor of love, so the men could fight the war.

My three sisters before me supported the Vietminh against the French during Vietnam’s war of independence in 1946–54. During the American War in 1965–75, as it is known in Vietnam, I supported the National Liberation Front — known as the Vietcong — out of patriotic duty, to protect my loved ones and our land against a superior foreign power.

We lived in then-South Vietnam, but we like many villagers in the Central Highlands followed Ho Chi Minh, the leader of North Vietnam, known to us as Uncle Ho, who sought the reunification of North and South Vietnam stipulated by the 1954 Geneva Agreements. Uncle Ho had promised farmers like us ownership of a little land on which to cultivate rice.

Vietnamese families, especially those living nearer to the provisional demarcation line between North and South Vietnam, fought on all sides — an unspoken family secret.

To survive the bombings, I and the other teenagers in my village helped dig tunnels and trenches and built bunkers for safety. As the war deepened, we didn’t understand how much hardship we would endure and how unpleasant our life would become during the rainy, muddy and cold winter months. We didn’t have warm clothes. We didn’t own any shoes. We only saw the glory and the fun.

After reading “On the Ho Chi Minh Trail,” however, I now realize that we were the lucky ones. We at least stayed close to home. Many young women in North Vietnam were sent far away to the Truong Son mountains, even to Laos braving bombs, napalm, Agent Orange, malaria, hunger and illness.

I had heard stories that matched those in “On the Ho Chi Minh Trail” from my brother Bon Nghe, who trekked down the trail in 1973 to join the 1975 final North Vietnamese offensive and was with those troops when they took over the city of Danang in late March 1975.

He had told me that many of his buddies were killed and had to be buried along the way. But I was shocked to find out that the Ho Chi Minh Trail — the long road through the Truong Son mountains that brought military supplies, rice and fighters from North Vietnam to the Vietcong mobile headquarters in the South — was built in part by young women and men under heavy daily bombings in wartime conditions that were so terrible that they traumatized an entire generation.

“On the Ho Chi Minh Trail” shines a light on how strong and determined these young Vietnamese women were; how they sacrificed their youth to build and rebuild the trail, day in and day out, over the best of 10 years; how they carried heavy military supplies and equipment and transported food; and how they cared for the wounded and buried the dead.

Above all, the book conveys the suffering they endured. They faced enormous deprivation — hunger, starvation and sickness — while dealing with formidable wartime challenges and hardships. They had nothing or little to eat. The rice was sent to their brothers and sisters fighting on the southern battlefronts.

They shared what was left with the wounded, a few grains of rice and a bit of salt. Women dug shelters and trenches while American B-52s dropped bombs from above. They worked as nurses to save their comrades wounded by the explosions of 1,000-pound bombs, cluster bombs and countless other types of bombs.

They found ways to save their comrades without adequate medical equipment or drugs. Some joined anti-aircraft defense teams.

One platoon leader stationed on the Mu Gia Pass describes how they had to use their noses to smell human flesh in order to find the remains of their friends. They carved the names of their dead brother or sister on a rock or on a tree to mark the graves in the hope that at war’s end, relatives looking for their lost loved ones would find them.

A particularly moving story in the book — and there are many — is the young mother who after a day’s work at Radio Hanoi climbs onto the rooftop of her building, a rifle on her back to shoot at the enemy planes.

After the bombing raid, she goes into the street to collect bodies that have exploded into pieces. When she returns home, she feels such revulsion she is unable to breastfeed her baby.

As Buchanan traveled down the trail, she placed the women’s wartime stories in the historical context of Vietnam’s millennial fight against invaders.

In Thanh Hoa close to the Dragon’s Jaw Bridge that was bombed over 800 times, she visited the Temple of Lady Trieu, who at 19 led a rebellion against the Chinese in the third century.

Perspectives from all sides

As a teenager with the NLF who dug tunnels and trenches to safeguard my village against soldiers and bombs, I was of course particularly moved by the stories of the North Vietnamese and NLF women. But the strength of Buchanan’s narrative is that it features perspectives from all sides — including the widow of a South Vietnamese Air Force pilot shot down over the trail who stayed in Saigon after the war and worked toward reconciliation through art; and from courageous American veterans who returned to Vietnam to repair the toxic legacy of unexploded ordnance and Agent Orange, the chemical linked to infertility, birth deformities and cancers.

This beautifully written book is an ode to reconciliation and peace. As a victim/survivor of the American War in Vietnam, I am calling on all world leaders: Please find a way to peace on earth. To achieve sustainable human development, we have to learn to live in harmony with Mother Earth.

More war only brings suffering to other human beings, especially to young women. As sisters, wives, mothers and grandmothers, women must be loved and respected. Women must be free, happy and healthy and be able to live in a peaceful environment. Only then can they bring up a better, kinder and more peaceful next generation.

Sherry Buchanan’s mantra is “No More War!” — the phrase of the artist Tran Trung Tin who painted in Hanoi during the bombings of the city. For Buchanan, the military road she traveled on turned into a pilgrimage of remembrance “for all those who died — from the south, from the north and from across the Pacific.”

Le Ly Hayslip is the author of “When Heaven and Earth Changed Places: A Vietnamese Woman’s Journey from War to Peace” and “Child of War, Woman of Peace.” The books were the basis for “Heaven & Earth,” a 1993 film written and directed by Oliver Stone.

On The Ho Chi Minh Trail: The Blood Road, The Women Who Defended It, The Legacy, by Sherry Buchanan may be purchased on Amazon