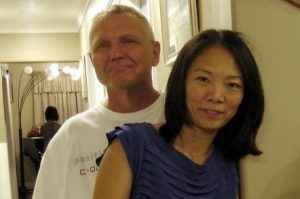 My friend Art Reagan and his wife.

Wars are lost because the ability to wage them, the resources needed to win them, and the will to fight them abates, is lost, or is destroyed.

It is my opinion that the South Vietnamese espoused a personal philosophy of every family for itself and instead of prosecuting their war they used both our capital and our resources for personal gain and enrichment at the expense of their citizens, their military, and their soldiers. Their elite, their ruling class, was destroyed as a result of their greed.

After we left the North Vietnamese, rigid rulers, who were unable to tolerate any dissent sent their agents from home to home confiscating all of their citizens gold and all the valuables they could find. They closed all of the Chinese language schools and they replaced the Chinese merchant class with those sympathetic to their cause. They strung radios throughout every community to blair the words of the new regime at the people and as in North Korea they played them day and night.

In a very short period of time they alienated the remaining population they had hoped to convert. Gradually these ruthless old communists died off and were replaced with a younger better educated cadre. The seeds of Freedom that were sown with your blood began to sprout and their rigidity was replaced with an attitude of tolerance.

Many of the Vietnamese who fled returned home with western educations prepared to help build freeways like those in California, universities like Penn State, and athletic programs like Alabama’s. They wanted to help their country by bringing to it the marvels of western civilization. What you left behind no longer exists. The rigid communist country it once was. The narrow minded structure. The obsessions of the past. Almost all are gone or their influence has been greatly diminished.

In every respect the Vietnam you once visited has changed, free enterprise once again threatens to break out throughout the country, not only in the South but in the North as well. Left alone it may eventually evolve into everything you once fought for. Your sacrifices were not in vain. You the Vietnam Veteran brought western culture, western ideas, western values, and western civilization to Vietnam just as the French did before you. Your difference is that you brought them the concept of Freedom and not that of Colonialism.

Each and every one of you was an agent of change and history will reveal that it was your contributions that resulted in democracy beginning to take hold in Southeast Asia.