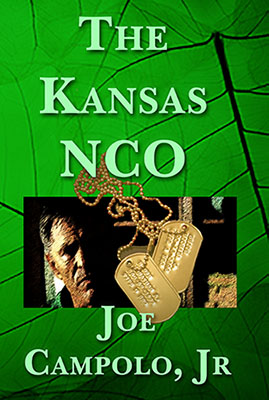 “The Kansas NCO” is an award winning novel which takes place during the later years of the Vietnam War. The book deals with a small Air Force unit caught up in the activities of a shrewd and unscrupulous group of senior non-commissioned officers who control the black market in the deadly central highlands of South Vietnam.

The men in the small unit find themselves out in the bush, surrounded by Viet Cong and hostile members of the illicit black market operation; all attempting to kill them.

The men’s journey takes them outside the razor wire perimeter of their large airbase and into the dangerous roads and jungles of the Central Highlands, on their way to Cambodia supposedly to deliver needed materials to the war effort supporting the invasion, which President Nixon has ordered. As the men’s journey progress, some are killed, some are wounded, and all are transformed.

As their journey progresses the men struggle to just stay alive. Some of the men are able to reach down, find the inner strength they possess, and survive. Others are not so lucky.

Click here to purchase The Kansas NCO book on Amazon

Back To The World is the sequel to The Kansas NCO.

What People Are Saying

Although this book is fiction much of it is based on fact and personal experience. The author (Joe) was able to capture the several faces of the GI in Vietnam. He conveys how easy it was to go from mundane, boring days to life threatening situations in the blink of an eye. He shows the frustration, confusion and terror each GI felt at one time or another during his tour.

The Kansas NCO is a top-notch war story that gains momentum as it goes along. Totally absorbing, with a great stinger at the end, this book will keep a reader turning the pages to its conclusion. Lots of action, as one expects, but it also speaks volumes about war and its effects on those placed in the middle of it. Highly recommended.

The Kansas NCO is an easy read and hard to put down. Anyone who had boots on the ground in Vietnam would enjoy the believable characters, plot, and will easily relate to this story. The terms, phrases and descriptions of the climate, terrain, wildlife and the enemy strike vivid memories of those times.